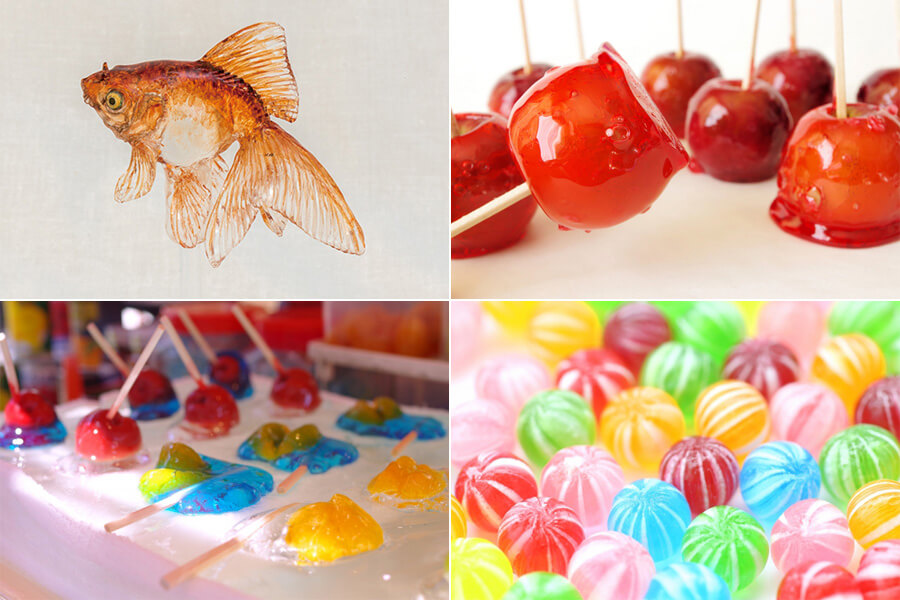 With a colorful appearance and sweet taste, candy is loved by many people of all ages. Many different kinds of candy are sold in Japan. Candy sculptures called Amezaiku are particularly well-known as a part of traditional Japanese culture, using candy to create animals, plants, and other figures. This article looks at the history of candy in Japan, the many types of candy available in the country, as well as candy sculptures produced as works of art.

The History of Candy in Japan Goes Back to B.C.

The Japanese word for candy first appears in historical documents from the Nara Period (710–794), specifically the first half of the eighth century. This shows that candy was already being eaten in Japan about 1,300 years ago. By the way, a historical book called “Nihon Shoki” (The Chronicles of Japan) states that candy was first made in Japan about 2,700 years ago. Emperor Jinmu, Japan’s first emperor, is said to have first made candy to bring happiness to people and peace to the country with its sweet taste.

Candy became more widespread as part of people’s lives in the Edo Period (1603–1867) when they were eaten as sweets by the common people. For many years, candy in Japan was made in the form of Mizuame (literally, “water candy”), a sweet liquid made with rice. However, black sugar began to circulate in the Edo Period as an ingredient for candy, so people became able to make hard candy as well as sweeter and yummier kinds of candy.

Candy sellers began to appear on the streets in the Edo Period selling candy while wearing flashy clothes and playing musical instruments. They entertained people by showing them how they bend and expand the candy before it hardens. This kind of candy made by the candy sellers came to be known as “candy sculptures” and is currently well-known as a traditional form of Japanese culture.

A picture of a candy seller from 1822 (the man in the foreground). You can see that he is making spheres, birds, and many other shapes to entertain children. (From Volume 15 of “Muda Shugyo Kane No Waraji”)

Candy is still well-known today among Japanese people as an essential type of sweet. Many different types of candy are sold at convenience stores, supermarkets, candy stores, and a wide range of other stores. You can buy candy anywhere and eat it easily, so a large number of people take candy with them all the time. In particular, people in the Kansai region of Japan call candy “Ame-chan” as a familiar term. You usually use the suffix “-chan” after the names of children or close friends, so this shows how strongly candy (Ame in Japanese) has taken root in everyday life. Also, there is a joke that elderly women from the Kansai region always keep candy in their bags and say “let me give you an Ame-chan” to everyone, even when meeting them for the first time.

There is a truly vast selection of candy. There is a candy that tastes like orange, lemon, or other fruits, throat drops that soothe a sore throat when you have a cold, salt candy that contains added salt to help prevent heatstroke, and candy that is kind to your teeth with xylitol that helps prevent cavities. There are many types of candy that help with health and other areas, besides being tasty.

At festivals and other special events, you can find stalls selling candy apples made with whole apples, mildly sweet Mizuame with a sticky texture, and other types of candy. It is no exaggeration to say that it is a Japanese seasonal feature to see people moving back and forth with these types of candy in one hand.

Using whole apples to create a beautiful appearance, candy apples are hugely popular with kids.
Mizuame is eaten by wrapping it around a stick. Some types of Mizuame are sold with fruits inside.

Candy Is Also Made Into Works of Art

Candy sculptures have been created for hundreds of years, and they continue to evolve today in the 21st century. In the Edo Period (1603–1867) it was common to make candy sculptures of birds, plants, and other figures, but now there are artisans who make a wide range of animals and other sculptures that look even more realistic.

These realistically crafted candy sculptures are beautiful like glassworks, and can be found at a store called Amezaiku Ameshin in Asakusa, Tokyo
(Images provided by Asakusa Amezaiku Ameshin)

What’s even more surprising is that you can buy and actually eat these candy sculptures—they are not just for looking at. They are made with natural food coloring, so they are safe to eat and kind to your body.
You might feel that it is a waste to eat something that looks so beautiful!

These candy sculptures look like works of art, but they are created through an extremely simple method. All you need to do is to take some hot, softened candy and shape it with your hands or scissors before it cools and hardens. You can work to create shapes bit by bit in any way you desire, just like a kind of handicraft, so many people both young and old are sure to have fun and get absorbed in making sculptures.

This ordinary lump of candy transformed into a cute rabbit through the skills of an artisan. (Images provided by Amezaiku Yoshihara)

There are classes in Japan that let you experience making these candy sculptures. Candy sculpture artisans teach you how to craft them, so you can rest assured even if it is your first time. In these hands-on classes, you generally work on rabbits, birds, or other animals that are easy for beginners to make.
As you knead, shape and color the candy, it gradually comes to look more and more like an animal. You are sure to be filled with a joy unlike any other when you successfully make the sculpture. Also, if you experience actually making candy sculptures, you will be able to appreciate the high standard of the artisans’ skills even more.

Candy is a familiar part of everyday life in many areas in Japan, such as candy sculptures that look beautiful, throat drops that you eat when you have a cold, and candy apples that are an essential part of festivals. Candy is sure to continue developing as an irreplaceable type of sweet among Japanese people.