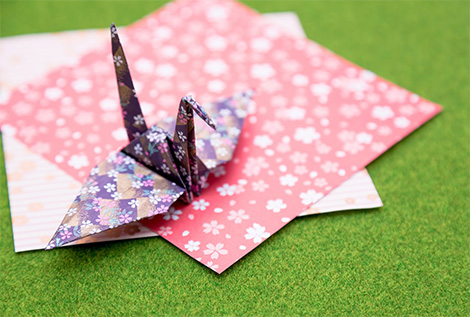 Have you ever heard of origami? Origami is a Japanese pastime of making animals, flowers, and many other things simply by folding paper. This activity requires you to think carefully and work nimbly with your fingers as you concentrate on precise actions, focusing on the part of the paper to fold in order to make the final product that you desire. As such, origami is said to have an effect of training people's brains. In the present day, more and more people across the world enjoy the traditional Japanese amusement of origami.

Methods for making paper were brought from China to Japan in the 7th century. After that, people in Japan refined new techniques to produce a type of paper called “Washi” that is thin, yet durable. People in Japan used Washi to wrap offerings to the gods. Around this time, some noticed that Washi folded in a beautiful way. As such, a wide variety of customs were developed about 600 years ago to decorate the wrapping by making elegant folds. After this new development, people from about 200 years ago began to enjoy origami as a fun activity, focusing on the actual methods of folding rather than traditional customs. In the present day, children in Japan learn how to make origami creations at school, and enjoy making a wide range of objects.

The most famous origami model is called the “Orizuru”, and represents a crane. Cranes have long lifespans, and have been familiar to Japanese people as a lucky animal since ancient times. Cranes are characterized by their long necks and beaks. The Orizuru also features a long neck and beak, as well as large wings.

Having Fun With Origami

Origami is an enjoyable activity where you make animals, flowers, and many other things by folding paper. With origami, you work with your imagination to create things by only making folds in the paper. What sort of shapes can you make with just folded paper? Part of the fun in origami is to tackle this challenge.
Note: Some models may involve cutting the paper with scissors, or sticking sheets of paper together with glue.

Origami paper comes in a variety of colors, and it is exciting just to look at them. Some origami paper features traditional Japanese patterns. It is fun to let your imagination run wild as you think about what color to use and what kind of model to make with it.

The Fun World of Origami

Many people enjoy origami even in the present day. There are many new origami creations being invented today, beside traditional models like the Orizuru.

If make an elephant, a giraffe, a zebra, and other origami animals and bring them together, you can get a lively arrangement that looks just like a real zoo. Each animal’s characteristics can be seen in the models: the elephant has a long trunk, and the giraffe has a long neck and legs.

You can even make a hamburger set meal with origami! It looks delicious—just like the real thing.

You can instantly transform your origami creation into a new character by drawing a face on it. Why not make your very own origami characters together with your friends? You are sure to have a great time.

Origami Classes are Popular with Kids

Japan has origami classes, where origami experts teach people how to make models. An origami museum in Japan holds classes on a regular basis, which are a big hit among kids.

Mr. Katsuhiro Sonta is an origami expert, and specializes in forming letters with origami. He teaches classes on how to use rectangular sheets of paper to make creations. Origami is usually made with square sheets of paper, so it is unusual to use paper shaped like this. All the students in the class focused hard in making difficult models. Before working to build their creations, students needed to draw up blueprints by themselves in order to plan out how to make the folds. They were truly delighted after successfully creating these challenging models.

Origami allows you to use your imagination to make anything you want, and is enjoyed by kids and grown-ups alike. What would you like to make using just one sheet of paper?

The following website shows examples of origami figures and explains how to make them:
https://web-japan.org/kidsweb/virtual/origami2/exploring01.html