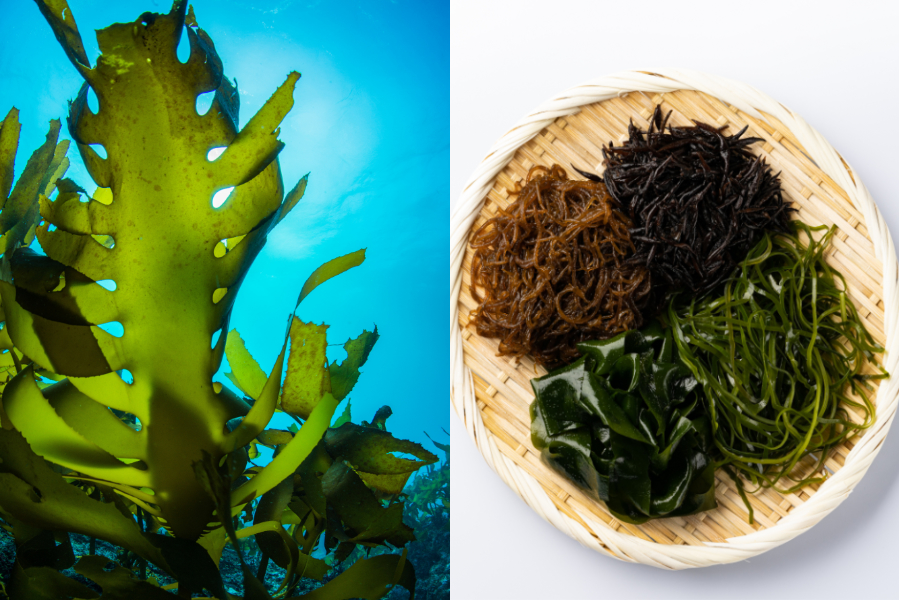 With Japan being surrounded by ocean, it is hardly surprising that its food culture incorporates many different types of seaweed. For instance, Japanese sushi rolls (maki-zushi), which are famous the world over, are wrapped in sheets of dried laver seaweed called nori. Other types of seaweed that feature prominently in Japanese cooking are kombu, which is used to make a stock known as dashi; hijiki, which is usually cooked in soy sauce and mirin sweet rice wine; and wakame, which is a popular garnish for miso soup.

Kombu is decocted to make a stock that is used in lots of different Japanese dishes.

Hijiki seaweed cooked with soybeans in soy sauce, sugar and mirin is a staple meal in most Japanese households.

Miso soup with wakame seaweed and tofu is a common breakfast food in Japan.

Japanese people have a long history of eating seaweed. So much so that, according to a 1200-year-old Japanese text, seaweed was even given as a gift to the Imperial court. In addition, kombu, nori, hijiki and wakame are among the foods offered to the gods as part of Shinto religious practices. In addition, kombu-maki, a dish consisting of salty-sweet cooked herring wrapped in kombu seaweed, is eaten as part of the Japanese New Year celebrations, as it is believed to bring good health for the coming year. Traditions such as these show us what a major role seaweed has played in the lives of people in Japan over the centuries, and how greatly Japanese people value this precious ocean resource.

Seaweed is also thought to be a contributing factor to the long life expectancy of people in Japan, as it is low in calories and rich in vitamins, minerals and fiber.

As part of the Japanese New Year celebrations, a number of dishes are prepared in ornate, multi-tiered boxes and eaten with family. Known as osechi-ryori, these dishes are each believed to represent a different good omen for the coming year, and kombu-maki is a staple.

Different types of seaweed are harvested at different times of the year: wakame and hijiki are harvested in the spring, kombu in the summer, and nori in the winter. The harvested seaweed is dried and salted, so that it can be stored for long periods of time. Because of its long shelf life, seaweed has been distributed and used throughout Japan since long before the invention of refrigeration technology.

Freshly gathered kombu seaweed is spread out to dry on the seashore. Kombu pieces can be more than 10m long. Each frond is stretched out by hand to remove any folds. (Photo courtesy of the nittan IBURI × HIDAKA Regional Strategy Meeting.)

Freshly gathered wakame seaweed. Nowadays, most wakame seaweed is farmed, rather than picked in the wild. The word wakame actually only refers to the soft upper leaves. The tougher leaves closer to the root, known as mekabu, are prepared for eating by chopping finely to bring out the plant's natural juices. (Photo courtesy of Iwate Prefecture.)

Gathering hijiki seaweed. Hijiki seaweed grows in coastal areas, so it is usually collected all at once when the tide is at its lowest. (Photo courtesy of Chiba Prefecture Tateyama Marine Industries Office.)

Japanese Seaweed on the World Stage

Seaweed's role in Japanese food culture has continued to evolve in recent years.

For example, akamoku is a type of seaweed that until recently was only eaten in certain regions of Japan, and was practically unheard of elsewhere. However, it was recently discovered that akamoku seaweed's nutritional value far exceeds other varieties of seaweed due to its abundance of minerals, fiber and fucoidan. These days, it is marketed as a superfood, and it is flying off the shelves as a result.

Akamoku is an annual plant that grows naturally in coastal regions around the four main islands of Japan. It is collected from the sea by harvester boats. (Photo courtesy of Iwate Akamoku Production Cooperative.)

Akamoku seaweed turns green and releases a sticky substance when boiled in water. It can be eaten in any number of different ways, including as an ingredient in soups, noodle dishes and salads, or baked into bread.

In the culinary world, chefs are exploring ways to determine the unique characteristics of different types of seaweed, and use them to create new taste experiences. Some chefs have taken note of the fact that there has been little-to-no development in the way seaweed is eaten, despite the fact that the oceans around Japan are thought to contains around 1500 different varieties of seaweed. They believe that, with the right kind of culinary skill, seaweed can be used to broaden culinary horizons.

Some examples of this include mixing fragrant sujiao-nori into soy milk to create tofu, fermenting seaweed to make a flavorful variation of miso soup that doesn't use soybeans, and even adding seaweed flavoring to milk and making ice cream out of it. By devising new ways to enjoy seaweed, not just in Japanese food, but in cuisine worldwide, some chefs would like to see an increase in the types and amounts of seaweed that people consume, and also hope to expand the possibilities for using seaweed in cooking.

An appetizer made using atsuba aosa seaweed. Having not previously seen much use at the cutting edge of Japanese cuisine, the potential of seaweed as an ingredient has started to garner a great deal of attention from chefs.(Photo courtesy of Nathalie Cantacuzino, SEA VEGETABLE COMPANY.)

Seaweed also seems to hold a great deal of potential in the area of global environmental conservation. It has attracted attention around the world for its role in storing atmospheric carbon dioxide as "blue carbon," and scientists are also looking into how seaweed can be used as a biomass energy source to generate electricity.

In Japan, scientists are exploring methods for cultivating high-quality seaweed on land as a means of reducing the impact of seaweed farming on the environment, and there are also a number of initiatives looking to make the most of seaweed in the fields of manufacturing and health.

There are over 10,000 types of seaweed on the planet, and they can be obtained in relatively shallow parts of the ocean. In spite of this, in most parts of the world it has never been properly utilized. In Japan, where seaweed has been treasured since ancient times, it is expected to play a role in resolving food shortages, and it looks set to continue growing in popularity all over the world.