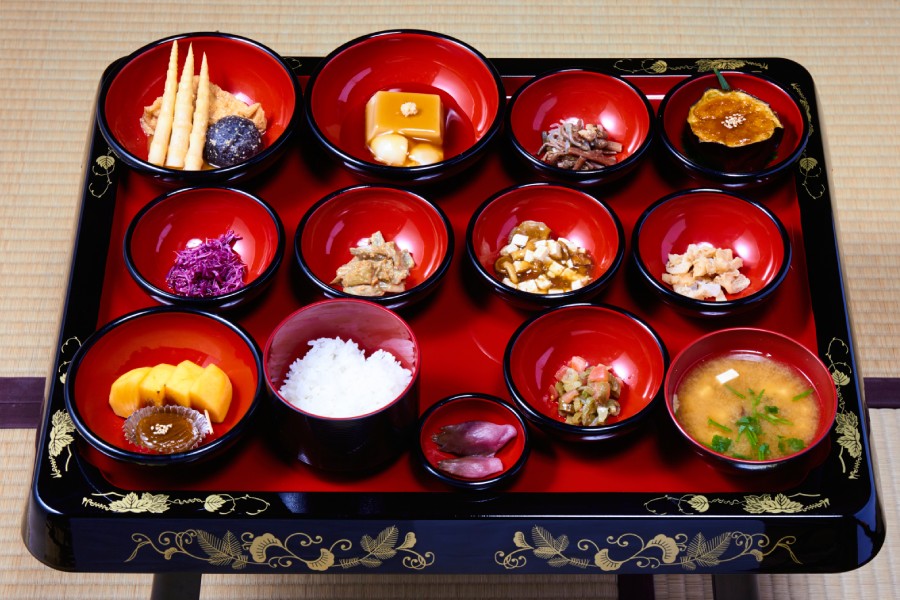 Even overseas, Japanese cuisine has a reputation for being healthy, delicious and beautifully presented. At the heart of this is shojin ryori, the food eaten by Buddhist monks as part of their devotional practice. Shojin ryori emphasizes the spirituality of cooking with a real sense of appreciation for the ingredients, and is becoming a hot topic as the world moves toward the concepts of wellness and a sustainable future.

Buddhism was introduced to Japan around the 6th century, and along with it came shojin ryori. Japanese Buddhist monks do not eat fish or meat due to the doctrine of non-killing, based on the spiritual principle of compassion. About 800 years ago, a text known as Tenzo Kyokun (Instructions for the Cook) was compiled, which became the basis of today's shojin ryori. The book was compiled in 1237 by Dogen Zenji, who founded the Eihei-ji temple — one of the temples of the Soto school of Zen Buddhism. The term tenzo refers to the head chef of a Zen temple who plays the key role of providing meals for the monks and offerings to the Buddha. In Zen Buddhism, which focuses on achieving enlightenment through the practice of zazen (seated meditation), all work related to food is viewed as a devotional practice.

Tenzo Kyokun describes the duties of the tenzo in detail. (Image courtesy of: Tenzo Net)

Tenzo Kyokun tells us that we should be aware of the life of the ingredients and prepare them with care so as to avoid waste, take good care of tools and implements, and cook with the eater in mind. It also says to respect ingredients — something that has led to the Japanese ethos of mottainai (a sense of regret concerning waste of an object or resource) that modern-day Japan has sent forth across the globe. In addition santoku (the three virtues) teach us about how to prepare and serve food, stressing the importance of preparing food properly so that it is easy to eat, giving it a clean and simple appearance, and preparing it according to proper etiquette.

People enjoying shojin ryori at a Buddhist temple and reading the teachings on how to eat. (Image courtesy of Seiyo City Tourism Association)

According to the monks of Eifuku-ji temple of the Soto school of Zen Buddhism, who teach people about the principles of and recipes for shojin ryori, the food prepared in Zen temples at first glance appears plain and unadorned, but this only serves to enhance the appeal of the food — in the same way as one finds deep significance in the elegant simplicity of a traditional Japanese garden.

These days, with everyone being health conscious and SDGs having become goals for the whole planet, there is now renewed interest in shojin ryori. We have been seeing new approaches to shojin ryori in Japan, with cosmetics companies opening restaurants based on the concept of offering health and beauty by incorporating the ideals of shojin ryori together with modern ingredients and recipes. In addition, there has also been the emergence of user-friendly online courses where people can easily learn about shojin ryori.

Online course textbooks contain recipes that are explained in great detail so that you can easily prepare them at home. (Image courtesy of Career College Japan)

The owner of a shojin ryori restaurant in Roppongi, Tokyo, who also works to educate people both in Japan and abroad about shojin ryori, says that although this type of cuisine is known for avoiding the use of meat and fish, we should remember that plants also have a life-force of their own, which we value by ensuring that it does not go to waste. Food that satisfies both body and soul using vegetables alone can only be achieved through ingenuity and cooking techniques that have been cultivated through a long history of cooking. In addition to traditional dishes, the restaurant has also created a modern form of shojin ryori by offering dishes made with ingredients that were not used in classic shojin ryori dishes, such as tomato, cauliflower and basil.

The presentation of modern shojin ryori is finely detailed. More and more restaurants are offering shojin ryori.
(Photographs in collaboration with Sougo)

Shojin ryori has been handed down through the generations for over 1000 years. It translates well into modern life due its spirit of mottainai and a rise in people's spirituality and health-consciousness, with many people now making it part of their daily lives.