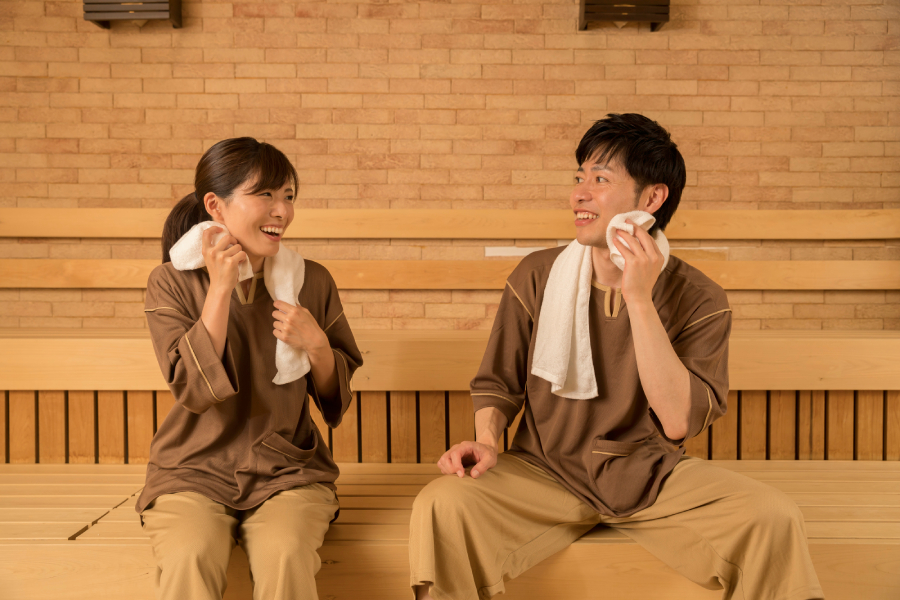 Saunas are very popular in Japan. They originated in Finland, but spread across the world to Japan where they have been loved for many years and have become a natural part of Japanese life. Learn about the history of saunas in Japan, and why they are so popular today.

History of Saunas in Japan

It started in 1957, when a dry sauna that used a steam pipe to heat up the sauna room was installed in the Tokyo Onsen (Tokyo Hot Springs) bathhouse in Ginza, one of the most popular shopping districts in Tokyo. A few years later, Finnish athletes brought sauna equipment to the athlete's village of the 1964 Tokyo Olympics, which was picked up by the press and became a hot topic of discussion. This led to saunas becoming popular nationwide, with Tokyo Onsen and the Olympics acting as the spark that ignited the first "sauna boom" in Japan.

The first sauna in Japan was installed in Tokyo Onsen, a bathhouse which has since been converted to an office building.
(Photo courtesy of Japan Sauna Spa Association)

There was then a second "sauna boom" in the 1970s and 1980s. "Spa lands," places to relax that combine public baths, saunas, massage parlors, and restaurants, were built in towns and on major roads, and became hugely popular with families. The addition of saunas led to them becoming popular throughout the general population. Up until then, most saunas built in the city were men-only, but these "spa lands" had separate saunas for both men and women, leading to saunas gaining popularity among women.

Spa lands are still popular today. The spread of saunas through these spa lands led to the second sauna boom.

Today saunas have become hugely popular again, and we're experiencing a third sauna boom. Comics featuring saunas have become hugely popular. The Japanese verb "totonou," which describes the refreshing feeling you get when alternating between sweating in a sauna and plunging in a cool bath, has become popular among young people in their 20s and 30s, and going in the sauna has become inextricably linked with a visit to a public bath house.

The comic MANGA SADOU / manga de yomu sauna-dou (Way of the Sauna: The Comic), which sparked off the third sauna boom. (Written by Tanaka Katsuki, published by Kodansha. Image courtesy of Kodansha)
The book Jinsei wo kaeru sauna-jutsu. Naze, ichiryuu keieisha wa sauna ni ikunoka? (Sauna can change your life. The reasons why first-class executives go to the sauna.) was also hugely popular. (Published by Kadokawa. Image courtesy of Kadokawa)

The Charms Unique to Japanese Saunas

The way that sauna became popular is unique to Japan. Saunas in Japan are just one of the options offered by hot spring facilities, alongside baths, restaurants, massages, and relaxation rooms. Being able to relax using all of these is a key attraction for people. The relaxation rooms usually have comic books or magazines to read, so after bathing and sitting in the sauna people can get a massage, have some food, and read comics in the relaxation room — even taking a nap if they get sleepy. A lot of people spend their time off work at these facilities. There are also some facilities where you can watch TV while in the sauna. In other words, Japanese saunas have become a form of entertainment.

Saunas are Still Popular in Japan

This third sauna boom is developing a little differently from the others, with the styles of the saunas themselves starting to change.
One of these new styles is "tent saunas". You can enjoy a sauna while surrounded by nature, inside a tent heated by a wood-burning stove stacked with sauna stones. Another option is rouryu (from Finnish "löyly" meaning "sauna steam"). Rouryu is a type of sauna where water containing aromatic oils is poured over the hot sauna stones to make steam. This steam fills the sauna room with heat. After sweating in the sauna, you could bathe in the sea, a river, or a lake instead of a cold bath. Being able to sweat in a sauna and rinse off while surrounded by natural beauty is not something you get to experience every day.

A sauna inside a tent, called a tent sauna. Enjoy a sauna while surrounded by nature.(Image courtesy of SaunaCamp.)

There are also saunas that let you experience foreign sauna techniques such as "Aufguss" and "whisking". "Aufguss" is a German style of sauna that involves pouring water over hot sauna stones and letting the steam that is produced hit your body. This is the same as rouryu in that steam is produced, but an attendant using a towel to fan the steam over the bather's body is what makes "Aufguss" unique. "Whisking" is a popular way to enjoy sauna in Eastern Europe, where you warm up in a sauna and then whip your body with a bundle of twigs and plants called a "whisk".

These types of sauna are introducing more people to saunas.

Aufguss, a style of sauna where first water is splashed onto sauna stones to produce heat, and then the steam is directed toward the bathers with a towel.(Photo courtesy of Japan Sauna Spa Association)

"Whisking" is a type of sauna where bathers use the steam to heat bundles of twigs and plants called a "whisk" which they then use to strike their bodies.
(© SaunaLab Kanda)

Saunas remain very popular in Japan to this day. There are ways of enjoying saunas in Japan which you can't find in any other countries. When you visit Japan, be sure to try out a Japanese sauna.