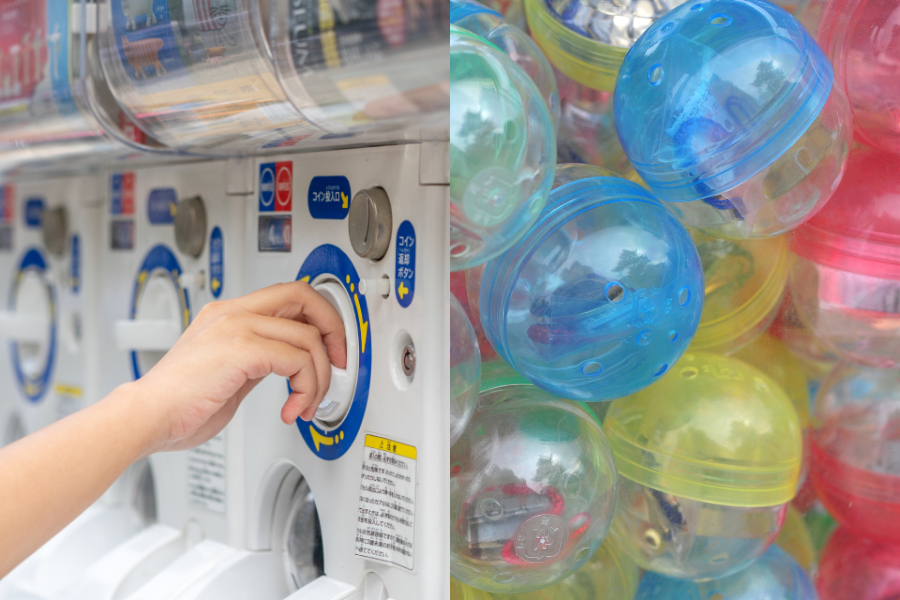 In Japanese train stations nowadays, you often see small vending machines with handles, packed with round capsules inside. These are capsule toy machines — loved by kids and adults alike. They are also called gacha gacha, because of the gacha sounds that they make when you turn the handle to make a capsule fall out. Capsule toys cost between 100 to 500 yen each, and sales of capsules have increased by 1.5 times in the last ten years to 40 billion yen, with more than 700,000 machines in Japan right now.

The history of Japan's capsule toys started in 1965. In the United States, vending machines that sold chewing gum and peanuts with small toys had become incredibly popular. Since these small toys were actually made in Japan, a company in Tokyo started importing the machines from the United States and put them in front of candy stores and other stores. For 10 yen, you could get a small toy and a little buzz of excitement from not knowing what you're going to get! Kids at the time went crazy for them.

Kinnikuman Erasers, also known as Kin-keshi in Japan, were a big hit in the 1980s.
Launched in 1994, the HG series Ultraman showed off amazingly precise workmanship. (Photo courtesy of JAPAN GACHA GACHA ASSOCIATION)

Capsule toys have undergone many different waves of popularity, and they are now so popular that you can find corners of specialty stores, train stations and airports crammed with these machines. Their first wave of popularity was in 1983 with erasers in the shape of cartoon characters becoming a smash hit. Then there was a second wave in 1995 featuring Japanese superheroes and anime characters. In 2012 came the third wave when social media went crazy for female characters perched on the rims of cups. Since then, there has been a fourth wave modeled on stylish Scandinavian furniture and food items to entice adults, as well as hit products like pearl fashion accessories aimed at women. (Source: JAPAN GACHA GACHA ASSOCIATION)

Left: The "working women" series became popular with women in this age of social media. It is one of the first capsule toys to be aimed at adults. (Photo courtesy of KITAN CLUB Co., Ltd.)
Right: Artek Nordic Furniture Miniature Collection <Alvar Aalto> Series ©Artek — gacha toys of Finnish furniture brand "Artek" for those wanting a touch of Nordic design in the palm of their hand. (Photo courtesy of: T-ARTS Company, Ltd.)

AKOYA PEARL CAPSULE TOY® are made in Ehime Prefecture, which is famous for its pearl cultivation. For 1,000 yen you can get your hands on a real pearl fashion accessory. (Photo courtesy of Uwakai Pearl Co.)

The Appeal of Capsule Toys — They Also Make Great Souvenirs!

Being able to collect such elaborate miniature figures is what makes capsule toys so appealing. For example, for 100 yen you can get an unbelievably realistic miniature of an insect like a beetle released just in time for summer, when many kids typically enjoy collecting insects. And with each series containing around five to six different toys, many people enjoy collecting them all to complete the set.

The miniature insect series is released every summer, and has been a long-time favorite for the past 32 years. (Photos courtesy of T-ARTS Company, Ltd.)
Capsule toys of anthropomorphic cats are also popular. (Photo courtesy of YELL Co., Ltd.)

There are realistic figures of insects and animals, and also animals in human poses that appeal to the uniquely Japanese sense of humor. Some capsule toys are miniatures of various famous places and specialty products from all over Japan, which are really popular with tourists. At the airport, some people use their leftover Japanese coins in the capsule toy machines there for a final memory of their trip.

These capsule toys feature capsule-sized deformed PLARAIL train toys that you can wind up and run on dedicated rails. (Photos courtesy of T-ARTS Company, Ltd.)
© TOMY

Capsule toys have evolved from something that only kids enjoy to something that adults love too. Currently, a combined total of more than 250 different types of capsule toy are made each month by various manufacturers, ranging from remarkably detailed ones to funny ones that will make you laugh. These small capsules are packed full of uniquely Japanese themes and ideas.