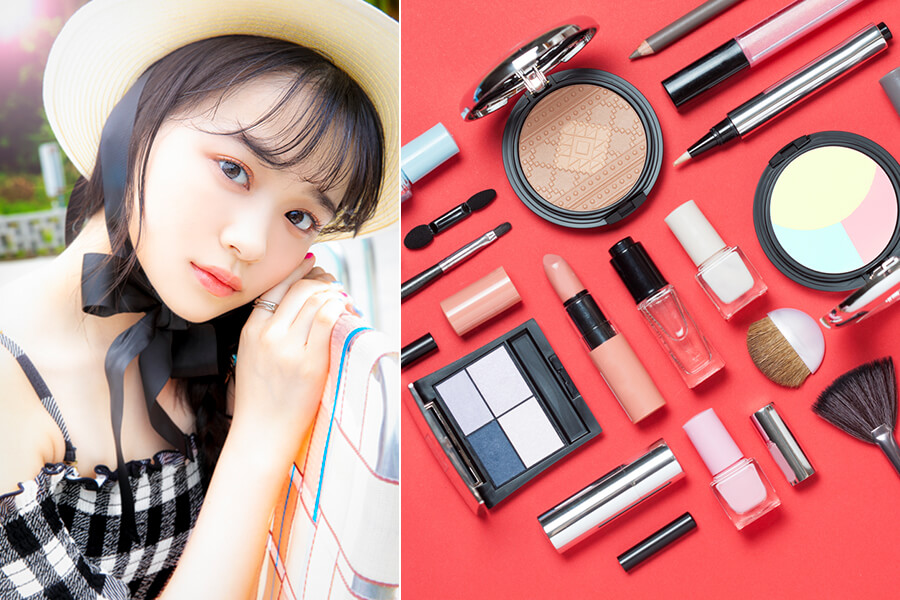 Meari Hayashi, a model who works exclusively for the early teen girl magazine nicola. She loves lip makeup, and even has a regular feature on it every month.
(Photo provided by Daisuke Fujii © Shinchosha)

Some of you may think that you only start using makeup when you are an adult, but this is not necessarily the case. In Japan, more and more girls in their early teens enjoy makeup to feel fashionable, such as by using lip makeup with beautiful colors, or putting on nails that sparkle brightly. You can now see early teens having fun going outside on holidays while wearing light makeup. Kids’ cosmetics have gained popularity in recent years. Coloring books, doll sets, and other time-honored games for kids have started to include themes about cosmetics and nails. There is a traditional event in Japan called “Shichi-Go-San” where people have a custom to put makeup on girls aged three and seven as a celebration. Perhaps many people long to wear makeup from an early age because of this custom. This article looks at some topics related to cosmetics and makeup.

The Stylish Makeup Coloring Book from Boutique-sha lets you feel like you are a makeup artist for the girls in the illustrations, as you use stationery that looks like cosmetics to color them in. You can even make gradient colors with a cheek brush that looks just like the real thing. (Photo provided by Boutique-sha © Boutique-sha)
The Licca series from Takara Tomy was launched in 1967 and has been well loved by girls in Japan for over 50 years. A new character who loves cosmetics has recently appeared in this series. (Photos provided by Takara Tomy © TOMY)
There are ways to decorate your nails without the need for nail polish remover. For example, some nails can come off with water, or you can use stickers to put on your nails too. Kids’ nail events are joined by parents with their children, and nail stickers are popular at these events. They can be stuck on top of kids’ nails for a cute look. (Photos provided by Mynavi News)

Magazines Loved by Early Teen Girls Include Many Special Features on Makeup!

There are magazines published for early teen girls in Japan, and in recent years these magazines have started to include many special features about makeup. For this reason, we contacted editors at two popular magazines for girls and asked them about how kids are having fun with makeup, among other topics.

Cuugal is an entertainment fashion magazine that started in 2019. It aims to put all readers at center stage in the publication. (Photos provided by Forside MEDIA Co., Ltd. [publisher] and Tokyo News Service [seller])

One early teen magazine has a strong focus for fashionable and cute things. Its special features on makeup are particularly popular, and are met by a very positive reaction in reader questionnaires. We asked the editor of this magazine about the reasons why its readers love cosmetics.

“Cosmetics are a means for early teens in Japan to express their individuality. Wearing makeup is just like putting on your favorite clothes. Kids enjoy makeup as a way to look stylish, usually when they go out on holidays with their parents or friends. One reason for the popularity of cosmetics is that more kids want to take cuter pictures now that everyone is uploading selfies to social media. Also, the special features on makeup in our magazine include a popular section with makeup photos posted by our readers (when we publish photos from readers, we call them “Dokusha Models” in Japanese; literally, “reader models”). When girls see the Dokusha Models from their generation, they realize that they can wear makeup too. At events where we take photos of girls in their own makeup, some people tell us with smiling faces that they got their mom to put makeup on for them. The mothers are all very stylish and are highly aware of the latest trends, so we see mothers enjoying the newest cosmetics together with their daughters.”

Another popular fashion magazine called nicola is aimed at girls in their pre- and early teens. (Photo provided by Shinchosha © Shinchosha)

We spoke to the editor of another magazine that started over 20 years ago, to find out about the changes surrounding girls in their early teens.

“Our magazine started running special features on makeup in the 2000s. Before that, it focused on skincare information, such as how to take care of areas that can easily develop acne, as this issue is a particularly large concern for girls in their early teens. In the 2010s, cosmetics that highlighted the area around the eyes grew popular among girls in Japan, and so more and more kids started to gain an interest in makeup. Also, there was a growing trend for a lifestyle where mothers and daughters enjoy making themselves look fashionable together before enjoying time outside. On top of that, thrift stores came to deal in cosmetics with better quality, so parents could rest assured in encouraging their daughters to wear makeup. In 2016, we included lip makeup, rouge, and a mirror as a free gift with our magazine for the first time, and it was a hit with our readers. These free makeup gifts are still very popular today. Early teens in recent years want to look more grown up, and they feel excited just by holding these cosmetics in their hands.”

Pages from a special feature in nicola about makeup. (Photo provided by Shinchosha © Shinchosha)

This “Sumikkogurashi” cosmetics set comes in a star-shaped case, and looks like it would bring delight to your friends as a present. The set includes lipstick with a light shade of red, nails that come off in water, and other items. (Sold by SHOBIDO ©2020 San-X Co., Ltd. All Rights Reserved.)

Makeup is now enjoyed by early teens in Japan, but some parents are worried about the effects that cosmetics may have on kids’ skin. One reason for this is that children’s skin is known to be thinner than that of adults, so it is more vulnerable to external stimuli. When putting makeup on, be sure to check the safety of the products that you use, and choose cosmetics that are kind to your skin. Many products sold for young people in Japan as “kids’ cosmetics” can be washed off easily with soap and water, and they are made in consideration of children’s skin.
You can buy kids’ cosmetics at toy stores all over Japan as well as at the fashion shops at Takeshita Street in Harajuku, a location that all girls with a sense for style want to visit. In recent years, you can even get a wide variety of items related to kids’ cosmetics from stores on the Internet in addition to real-world stores.

One of the appeals of kids’ cosmetics is that you can develop your sense for colors and esthetics from an early age. Why not search for your favorite cosmetics and try wearing makeup in a way that suits your personality?