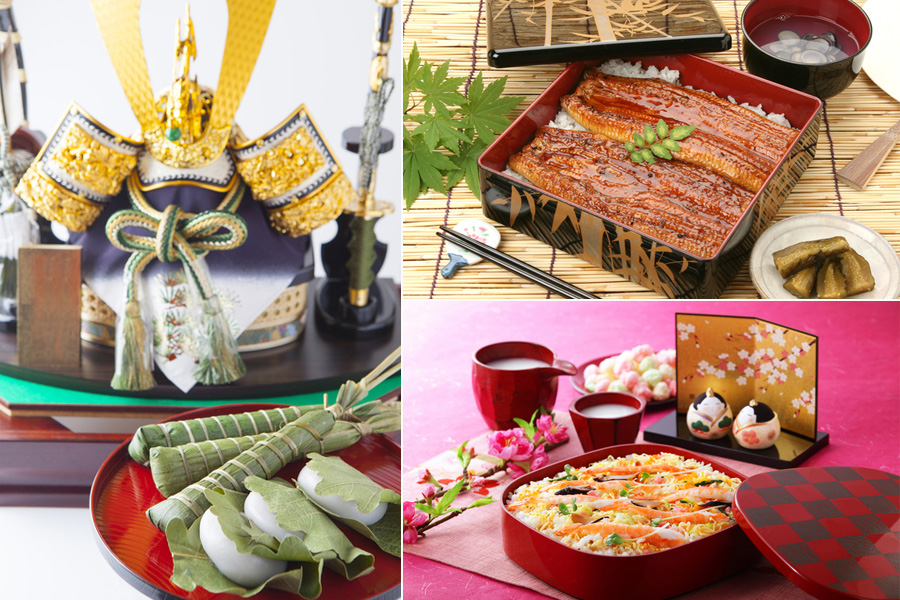 Special dishes are eaten on seasonal events and days of celebration. In Japan, these kinds of special dishes use ingredients that are in season, and people eat them while wishing for the happiness and health of their families. This article showcases the appeal of dishes eaten on special events in Japan that you are encouraged to try, even if you live abroad.

About Dishes Eaten on Special Occasions: The Connection Between Events and Food in Japan

In Japan, many different kinds of special events are conducted at each season throughout the year. For example, on Momo no Sekku (Girls’ Day) and Tango no Sekku (Boys’ Day), people wish for the good health of their children. Also, on Setsubun (the last day of Winter), people wish that their families can live healthily and happily without illnesses, and on Jugoya (a festival where people enjoy viewing the autumn moon) people wish for a bumper crop of grains. There is a tradition to eat special dishes that use ingredients with a history related to each event, and that incorporate in-season ingredients. As such, the many kinds of special dishes eaten throughout the four seasons have served to enrich Japan’s food culture.

There was not an abundance of food long ago, so it was important to eat feasts and gain nutrition. Since ancient times, annual events, ceremonial occasions and other special days were called Hare, and regular days were called Ke. In this way, there has always been a division between normal and special times, with different food, clothing, and room furnishings for each. On Hare days, people would take a break, eat special food for the occasion, and create a distinction from regular life. In this way, they created variation in their lifestyles and feelings.

The Major Annual Events and Special Dishes in Japan

This section showcases some examples of the major events held year-round in Japan, the special dishes that relate to these events, and the appeal of these dishes.

Osechi Ryori is a meal for celebrating the start of the year. People prepare this meal so that it will last for a long time, such as by giving it a strong flavor. This helps people greet the deity for the coming year in peace on Shogatsu (the New Year’s holiday season) without needing to do housework. Each dish in this meal has its own meaning. For example, shrimp symbolize a long life where people have bent postures that look like the bodies of shrimp, and the Japanese name “Tai” for sea bream resembles the word “Medetai” meaning “happiness” or “joyfulness.” These dishes are packed into stacked containers, and this stacked arrangement represents multiple layers of happiness. This goes to show just how joyful this meal is.

Eating Osechi together as a family

Nanakusa no Sekku (January: The Festival of Seven Herbs)

On January 7, there is a custom to eat rice porridge with seven herbs (this dish is called Nanakusa-gayu in Japanese). This day is known as Nanakusa no Sekku. Sekku means a day that marks an important point within the seasons, and on which people hold a traditional annual event. Nanakusa-gayu is made by cooking rice with seven types of young herbs called Nanakusa to make a porridge with a simple taste. This porridge helps give your stomach a rest after eating Osechi Ryori and other feasts in a row for the Shogatsu period. This dish also supplies you with vitamin C, which people often do not have enough of in the winter. On this day, people eat Nanakusa-gayu, gain energy from nature, and wish for a year with perfect health.

Haru no Nanakusa (The seven herbs of spring. Cudweed, nipplewort, and radish at the top from left to right; chickweed in the middle; and turnip, Japanese parsley, and shepherd’s purse at the bottom from left to right)

Setsubun is an event where people wish for perfect health and chase away demons called Oni. In an activity called Mame-maki, one person plays the part of an Oni by wearing a mask, and other people throw roasted soybeans called Fuku-mame at the Oni. It is believed that beans (Mame in Japanese) can be thrown at demons’ or evil creatures’ eyes (Ma no Me in Japanese) to destroy them. People say “Out with the Oni and in with fortune!” as they throw the beans. Afterward, everyone eats the same number of Fuku-mame as their own age.
In some regions, there is a custom to eat Maki-zushi (sushi rolls) with seven types of ingredients based on the Shichifukujin (Seven Deities of Good Fortune). The rolled sushi symbolizes good fortune being rolled up as well. These sushi rolls are called Eho-maki, and it is thought that if you think of a wish and eat a whole roll without saying anything while facing the direction for good fortune in that year, your wish will come true. These rolls are eaten whole without cutting them, so as not to cut people’s destinies and connections (En in Japanese).

A photo of Mame-maki at a nursery
Provided by Takizawa City, Iwate Prefecture

Eating the same number of Fuku-mame as one’s age

Momo no Sekku takes place when the peach trees are in bloom. In this event, people wish for girls to grow up healthily. On this day, people eat dishes that bring good fortune, such as colorful Chirashi-zushi made by mixing white rice with vinegar and multiple ingredients, or soup with clams that represent a husband and wife who are close to each other. People arrange Hina dolls to wish happiness and healthy growth for their children, and they put Hina-arare (colorful pellet-like rice crackers coated with sugar) and other food next to the dolls.

A decorative arrangement of Hina dolls for Momo no Sekku

Tango no Sekku (May: Boys’ Day)

Tango no Sekku is an event where people wish for boys to grow up healthily. It is traditional to eat Kashiwa-mochi—rice cakes wrapped up in oak leaves together with ingredients like sweet paste made from azuki beans that express people’s wishes for many children and a family line that will not end. It is also traditional to eat Chimaki—steamed rice cakes wrapped in bamboo leaves to express people’s wishes that their children grow up to be loyal. Families arrange helmets or suits of armor as indoor decorations that signify protection from misfortune and growing up to be strong.

Decorations for Tango no Sekku

Doyo no Ushi (July to August: The Day of the Ox in Midsummer)

Doyo no Ushi no Hi refers to a period of about 18 days at the turning point of the seasons based on the concept of the Five Elements in Chinese philosophy. However, in Japan, this term generally refers to the Doyo no Ushi no Hi during the summer. A type of culture has taken root, in which people eat eels—a kind of fish with high nutritious value—to make it through the hot season.
Eels contain a lot of vitamin A and other things that are effective at helping recover from fatigue and promoting an appetite, making them a good food for preventing heat stroke. Eel kabayaki is made by roasting eels over a charcoal fire with a sweet and spicy sauce including soy sauce. This food has a great taste that will spark your appetite. These eels are prepared in different ways in the east and west of Japan. In East Japan, people remove the head and cook the eels as a pot roast. When prepared in this way, the fat is removed and the skin and meat have a soft texture. In West Japan, people leave the head on and then roast it. When prepared in this way, the meat is soft but the skin has a crunchy texture.

The eels are cut up, and then roasted over a charcoal fire on skewers with sauce

Unaju, a dish served in a stackable square box, with white rice and eel kabayaki inside. The leaves in the center are from a sansho pepper plant for seasoning

On this event, people enjoy viewing the moon when it is thought to be at its most beautiful in the whole year, and they express gratitude for the harvest. Jugoya refers to the 15th day of the eighth month in the old lunar calendar, so it falls on a different date every year. The culture of eating rice has taken root in Japan, so people take rice that was harvested in Autumn and then steam it, make it into a paste, and then shape the paste into balls to create Tsukimi-dango (literally, “dumplings for viewing the moon”). These dumplings are arranged as a way to thank the moon deity for huge harvests in all grains. The Dango (dumplings) are round in shape to look like the full moon, and they are made and arranged in a group of 15 in connection with the number in Jugoya. It is traditional to eat these dumplings while thanking the moon deity after watching the full moon.

In Japan, there is a custom to eat Toshikoshi-soba (New Year’s Eve buckwheat noodles) on New Year’s Eve, the last day of the year. Toshikoshi-soba features long noodles that represent a wish for a long life. The noodles are easy to cut, signifying the cutting away of misfortune for one year. In this way, it is thought to be a food that brings good fortune.

Dishes eaten on special occasions in Japan are made using in-season ingredients, and represent many different wishes. People can obtain different kinds of ingredients depending on the climate and weather of the region, and there are different characteristics in the culture of each location. As a result, dishes for the same special occasion may feature their own differences or individualities in relation to the ingredients used for them, their taste, and the way they are prepared. Why not try actually making and eating these dishes, so that you can enjoy the events in each region of Japan as well as the meals prepared for these events? You will be able to appreciate the wisdom and creative methods of people from ancient times in Japan.