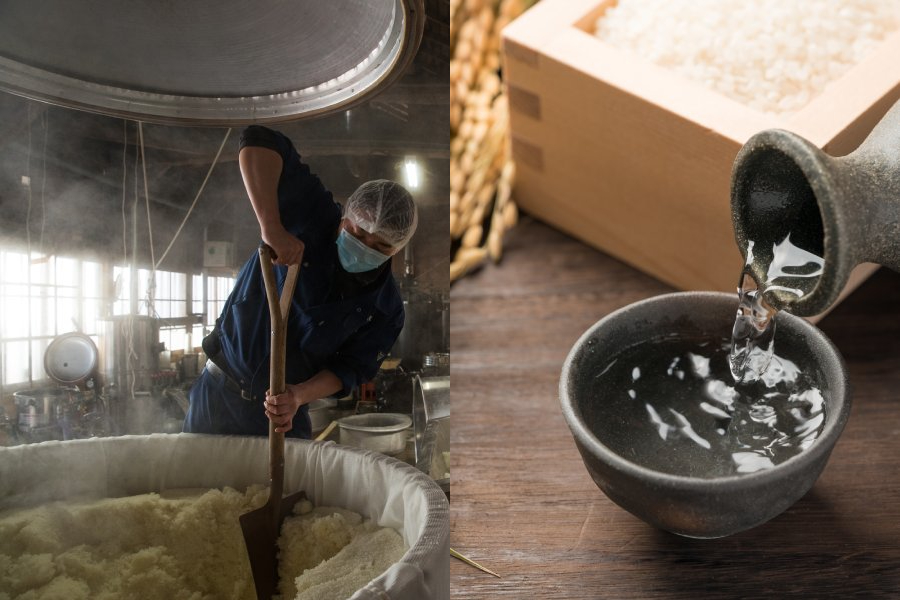 Records show that sake has been brewed in Japan for around 1400 years. In the 19th century there were nearly 30,000 sake breweries in Japan, and while there are now various other types of alcohol to enjoy besides sake, today the number of sake breweries has fallen to about 1,600 (as of 2018). On the other hand, the popularity of high-quality sake is growing overseas.

In the 10th Century, Sake Was Already Being Made in Much the Same Way as It Is Today

According to the Japan Sake & Shochu Makers Association, in Japan in the early 7th century, sake was brewed using mold, and by the middle of the Heian period (10th century), brewers were employing the method of fermenting rice, koji mold and water that is still in use today. In the Muromachi period (14th–16th century), sake was sterilized by heating, in a process similar to pasteurization. It was also in this era that the method of producing sake using koji mold, which is unique to Japan, was established. This traditional brewing method, which has been passed down from generation to generation to this day, was designated as one of Japan's Intangible Cultural Properties in December 2021.

Brewing Sake Then and Now — The Emergence of Female Master Brewers

The people involved in sake brewing are called kurabito, and the person who oversees them is called the tōji, or master brewer. The tōji's job is to supervise the whole brewing process. They plan out the brewing process in consultation with the brewery owners. The tōji is responsible for key parts of the brewing process such as deciding how long the sake rice should be soaked, and keeping an eye on the fermentation of the moromi (a fermenting liquid substance that is the precursor to sake) or koji mold. They even play an important role in determining what kind of taste the brewery is aiming for.

In the Edo period (1603–1868), when a winter brewing method called kanzukuri was established, brewery owners, or kuramoto, started asking their tōji to gather farmers and fishermen who were out of work for the winter, and put them to work making sake. It was not a very inviting environment for women, as the kurabito would sleep and work in the brewery.

But today we are seeing an increasing number of female tōji. Although there are still comparatively few women in the sake brewing world, some are now playing an active role in the industry, such as the world's youngest tōji (as of 2018) who inherited a brewery that has been running since the Edo period, the owner and tōji of a Hiroshima sake brewery that has been attracting worldwide attention, and a tōji who has produced multiple famous kinds of sake after studying microbiology at university.

A New Trend in the World of Sake

With improvements to the technology used to brew sake, and the changes in the lifestyles of Japanese people, sake consumption has changed a lot over the last 50 years. In the post-war 1960s, homogenized sake was mass-produced, while local varieties with their own characteristics led to a boom for regional sake. In the mid-1980s, a type of sake called ginjō-shu, made by milling at least 40% of the rice before brewing, started attracting attention for its fabulous aroma and fruity flavor. In the late 1990s, sparkling sake was invented, and in 2019, vegan-certified sake appeared on the scene, with sake now being brewed for a wider variety of settings and consumers.

In particular, sake-brewing for the overseas market has started to focus on more acidic tastes. Sake made from rice is rich in sweetness and umami flavor. However, in response to demand for sake with a more acidic flavor like wine, which goes better with food in foreign cuisines, brewers have started to produce varieties of sake with a more acidic taste. In addition, the raw ingredients of sake were traditionally purchased from farmers, unlike wine, but in recent years we have started to see breweries that make sake using rice they grow themselves, taking advantage of the specific characteristics imparted by the local growing environment, attracting the attention of chefs and sommeliers around the world.

Rice is grown specially for sake in various places, and more breweries have started growing their own rice in an endeavor to express the flavors unique to both their breweries and their regions in the taste of their sake.
(Image courtesy of Banjo Jozo Co., Ltd.)

World-famous French chef Yannick Alléno has a keen interest in sake, and visited the rice paddy of a brewery that produces its own rice.
(Image courtesy of Banjo Jozo Co., Ltd.)

Sake made using a secondary fermentation process inside the bottle, similar to champagne, is also served in restaurants in Tokyo and Kyoto.
(Image courtesy of Yamanashi Meijo co., Ltd.)

Japan's time-honored tradition of sake brewing continues to evolve to meet the needs of the times, including the development of sake aimed at overseas markets through improved technology, as well as an increasing number of sake breweries that take great care over the quality of their rice with the aim of creating sake with a distinctive flavor.