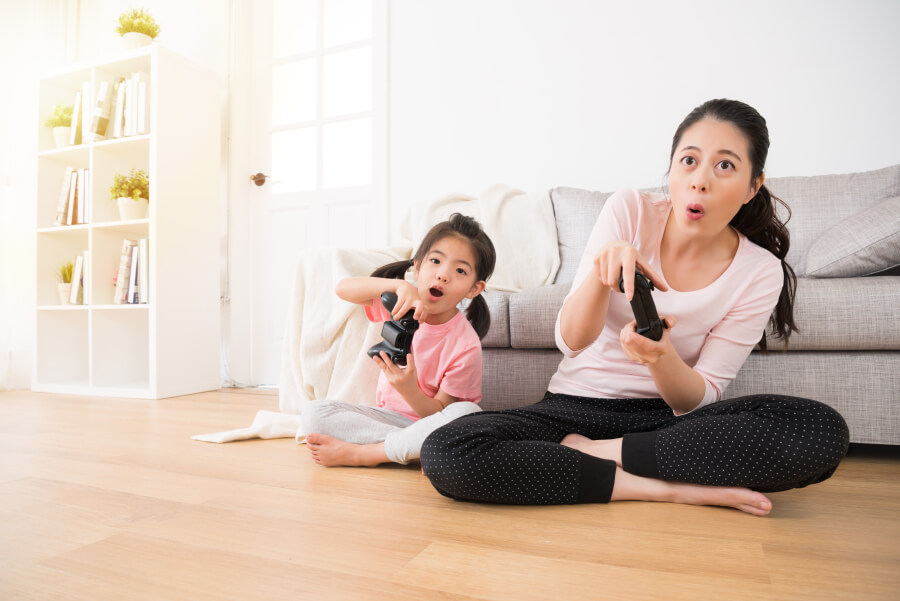 When you see the phrase "home video games," do you usually think of games that you play while sitting in front of your TV or computer? These games are a lot of fun too, but there are many other recent games that let you have a good time together with friends or family. For example, some games encourage you to play by moving your body vigorously together with on-screen characters, or to aim for a health goal such as weight loss while you play. This article gives a few examples of home video games that you enjoy by moving your body, letting you have sporty fun at home even if you cannot play outside.

Following the release of the world-famous Family Computer (known as the Nintendo Entertainment System or NES overseas) in 1983, many home video games came to be developed and sold in Japan. Japanese home video game consoles have evolved over time. The Super Famicom (known as the Super Nintendo Entertainment System or SNES overseas) arrived later as the successor to the Famicom (Family Computer). Meanwhile, the PlayStation series of consoles continues to see new models even in the present day. Now, games from Japan continually offer new forms of play for fans that love them around the world.

Traditional Japanese home video games were generally played while sitting in front of the TV. However, recent games are different. Social-networking games let you play anywhere easily with a smartphone, even if you are outdoors. Other games let you move the controller intuitively to play, just as if you were holding the steering wheel on a car. There are even games that let you train your body by moving like an athlete. In this way, games from a wide range of genres and with many different ways to play have been released and are highly popular.

Adventures that Keep You Moving

One title lets you go on an adventure like a role-playing game while exercising with your whole body.
This game comes with a special ring—just put your controller into it, and you now have yourself a fitness machine.
The most appealing factor of this game is that you can enjoy it while moving your body. Many fitness games in the past involved simply moving your body according to instructions from the game. However, this new title lets you defeat enemies through your physical movements, making it into a role-playing game. Even if you are tired and sweaty from the exercise, you would still want to keep going if you were very close to beating a boss.
What's more, with this game you can train individual parts of your body, or build an original training routine to suit your own goals. These features are sure to please if you are looking for a serious full-body workout, rather than just playing for fun.
This game has been hugely successful in Japan, and it is so much fun that many shops are continually in short supply.

Ring Fit Adventure from Nintendo has the slogan "Adventures that Keep You Moving". ©2017 Nintendo

Enjoy a Boxing Tournament with Arms that Stre-e-e-tch

Another game lets you throw punches and engage in heated fights, just like in a real boxing match.
If you punch forward with the controller in your hand, the colorful, unique character on screen will attack in the same way together with you. These characters’ most defining characteristic is how their arms stretch! You need to use these arms effectively to outsmart your opponent and deliver tricky attacks in appealing battles with both offensive and defensive elements that will leave you at the edge of your seat. When you launch a special attack, you need to unleash a flurry of blows with all your might. The invigorating feeling that you get after successfully defeating your opponent is sure to remain in your memory once you experience it for the first time.
While it is fun to play alone, it is without a doubt even better to go up against other people in this game. You might even find yourself shouting with excitement as you get engaged in battle with your fellow fighters. Whether you win or lose, you will definitely have a lively time as you work up a good sweat together.

Fight with arms that stretch out like a spring! ARMS from Nintendo is sure to bring excitement. ©2017 Nintendo

The Wadaiko is a type of drum, and is a traditional instrument in Japan. You may also like to play a novel type of rhythm game that is based around the Wadaiko.
If you use a special drum-shaped controller, you can feel as if you are hitting a real Wadaiko with speedy strokes. There are two ways to hit the Wadaiko. One is called "Don" where you strike the face of the drum, and the other is called "Ka" where you strike the edge. You play the game using these just two techniques in time with the patterns on the screen. With simple rules, this game is easy to play even if you are not good with musical instruments or other rhythm games.
Despite being themed around a traditional instrument, this game lets you perform along with the latest tunes from Japan, including songs from popular music, anime, and games. It is great fun to drum to a song that you already know.
Two people can play together at the same time, so you might want to try competing for score when drumming with friends or family.

Games with Even More Appeal than Toys

Games that you play by moving your body have become popular all over the world recently, not just in Japan. You may be surprised to find that the history of these games is surprisingly long. As a matter of fact, a fitness controller called “Family Trainer” was released in 1986 for the Family Computer.
Japan has a small land area and people cannot easily find wide open spaces. Perhaps this fact created a strong demand for fitness games that could be played indoors while still feeling like an outdoor workout.
With the games described in this article, you can move your body as much as you like and have a good time playing, even on days when you cannot go outside.
What new forms of play will games bring us next? We are all eagerly watching the future course of evolution in home video games.