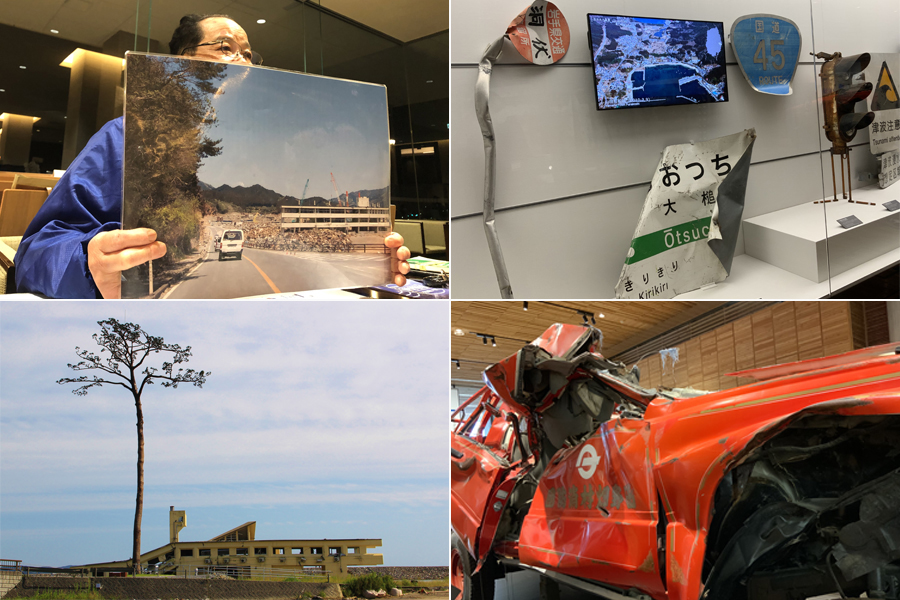 The 2011 Tohoku Earthquake and Tsunami struck on March 11, 2011. A 9.0-magnitude (Mw) earthquake occurred off the Sanriku coast in Japan, marking the largest earthquake in Japan’s recorded history. This earthquake resulted in a tsunami that brought immense damage to many locations, including the coastal areas in the Tohoku region beside the Pacific Ocean. You may remember the accident at the Fukushima Daiichi Nuclear Power Plant that occurred as a result of this earthquake and tsunami.
The year 2021 marks a decade since this unprecedented disaster occurred, taking many casualties with it. This article is the first in a two-part special feature covering the Sanriku coast, an area that suffered significant damage from the tsunami. Part one looks at the lessons that can be learned from the tsunami and earthquake, along with initiatives for improving awareness regarding disaster prevention.

Water Damage from the 2011 Tohoku Earthquake and Tsunami

Takatamatsubara was submerged in a huge tsunami.

The former Rikuzentakata City Kesen Junior High School. The structural remains are preserved in memory of the disaster. On the roof, there is a sign indicating 14.2 meters (about 46 feet and 7 inches) above ground level—the highest point that the tsunami reached. (Photos provided by Rikuzentakata City)

The quake that initiated the 2011 Tohoku Earthquake and Tsunami occurred from a distortion at the boundary between two plates near the Japan Trench. The coastal regions at the three prefectures of Iwate, Miyagi, and Fukushima suffered immense damage from the tsunami.

“It was like being chased by a truck. The tsunami went past the seawall and washed away cars, houses, and everything else with it. In order to protect your own life, you must run to a higher location without worrying to how you may look while doing this, ” said eyewitness Mr. Sasaki with emphasis as he described the disaster.

An eyewitness describing Takatamatsubara before the disaster.

This eyewitness lives in Rikuzentakata City, an area that suffered devastating damage from a tsunami that was over 10 meters (about 33 feet) tall—enough for the City Hall to be completely submerged despite some parts of the building being built four stories high.

The Iwate Tsunami Memorial Museum opened in Rikuzentakata City in 2019. This museum passes on the facts and lessons learned from the earthquake and tsunami, and it engages in initiatives to boost disaster prevention capabilities so that the tragedy from the tsunami that took many lives will not happen again. The crumpled signs and fire engine demonstrate the destructive force of the tsunami. “Children who did not know about the disaster come to the museum and are shocked at the extent of the damage from the tsunami as they learn about disaster prevention,” said the museum guide.

Photos of exhibits in the Iwate Tsunami Memorial Museum.
The oldest recorded case of a tsunami in the Tohoku region is described as the “Jogan Earthquake and Tsunami” in Nihon Sandai Jitsuroku (“The True History of Three Reigns of Japan”).
The whole area around Taga Castle in Miyagi Prefecture became like the sea, and about 1,000 people drowned as they were not able to escape fast enough.
Sediment from this tsunami has been discovered across a wide area from the Sendai plains to the coastal region in Iwate Prefecture. The intensity of the earthquake is thought to be at magnitude (M) 8.3 or 8.4.

An exhibit of the strata formed from earthquakes, tsunamis, and other phenomena. The area within the dotted lines is the tsunami sediment produced from the 2011 Tohoku Earthquake and Tsunami.

A stone monument placed near an elementary school that relocated to a high place after the disaster.

A stone monument put up in 1935 with lessons carved into it. (Photos provided by Yamada Town)

Old stone monuments that were put up after the disaster feature a message carved into them saying that people should not live anywhere below the monuments. This message represents the wisdom that the ancestors of the people living here wanted to tell us about protecting people’s lives. After the 2011 Tohoku Earthquake and Tsunami, a new stone monument was put up in Yamada Town, with the following message engraved in it: “To the children of the future: run to somewhere higher than this cherry tree.”

“Tsunami Tendenko”—A Lesson Passed Down through the Generations

A child and his grandfather looking at the digital version of the book “Tsunami Tendenko” at the Iwate Tsunami Memorial Museum.

“When I was outside, there was an earthquake and I thought that a tsunami would come. I considered going back home, but I ran to a high place instead. This action was precisely in line with the phrase “Tsunami Tendenko.” This phrase is from the local dialect, and it tells the lesson that if a tsunami comes, everyone should run away on their own and protect their own life.” The eyewitness talked with family members on a daily basis about how to evacuate, and says that he met his family in an evacuation shelter at a high place.
Also, 600 elementary and junior high school students in Kamaishi City were affected by the disaster, and there were no casualties because they all acted according to the phrase “Tsunami Tendenko” passed down over the generations. This was recognized as a miracle in Kamaishi, and this story has been used in disaster prevention education at schools.

Disaster Prevention Activities After the Earthquake and Tsunami

An eyewitness giving a talk at the former Okawa Elementary School. The school’s remains are preserved in Ishinomaki City in memory of the disaster.

There are many memorial facilities and preserved ruins from the disaster across the Tohoku region where you can find out about the earthquake and tsunami and learn lessons from this disaster. The 3.11 Densho Road was established to link these facilities, and other initiatives have been carried out to boost awareness for disaster prevention. A staff member at 3.11 Densho Road Promotion Organization said: “The things that children learn have a significant impact on family members and residents in the local area. I hope that children can learn about disasters and disaster prevention together with their schools, families, and the local area, and I hope they grow up with love and pride for their hometown.”

Natural disasters are occurring at a rapid pace in recent years because of the effects of climate change and other factors. It is vital for each and every one of us to learn the lessons from the 2011 Tohoku Earthquake and Tsunami, and to boost our awareness for disaster prevention on a daily basis.