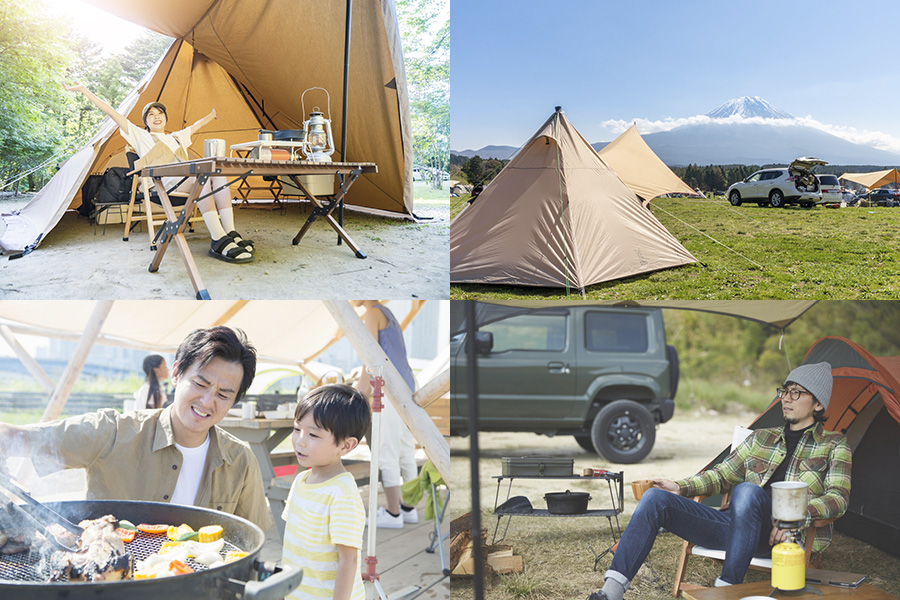 Over the past few years, camping has become really popular in Japan. A lot of people in western countries are pretty familiar with camping, but in Japan we seem to have our own unique ways of enjoying it. Let's take a look at a couple of outdoor scenes in Japan.

The first big trend for autocamping took place in the 1990s according to Japanese camping expert Sakai Hiroaki, Secretary General of the Japan Auto Camping Federation. The people who were children back then have now grown up and rekindled their interest in camping, putting them at the center of the current boom. Other reasons include the popularity of outdoor music festivals, where people camp out, as well as camping magazines that suggest fashion and interior ideas in trendy styles that suit modern tastes.

Japanese people like to experience something different from the everyday when they go on a camping trip. Campsites where you can enjoy the beauty and diversity of Japan's natural environment while also taking part in "outdoor classes" on subjects like cooking, nature lessons or canoeing are very popular. In recent years there has also been a rise in different forms of camping available in Japan, like glamping, where people stay in big, luxurious tents or mobile cabins for a more hotel-like experience.The number of people autocamping each year increased year-on-year from 7.2 million in 2011 to 8.6 million by 2019. (According to the Japan Auto Camping White Paper 2020, published by the Japan Auto Camping Federation.)

Campsite activities are a popular way of experiencing the great outdoors.

One of the attractions of autocamping is the convenience of being able to drive to the campsite, where you can enjoy the natural environment.

Over the past ten years or so, there has also been an increase in the number of young female campers, thanks to more user-friendly campsites with hygienic facilities like kitchens and bathrooms, as well as leveled ground, and equipment available for rent. There are even popular comics, anime and TV shows with camping storylines, whose main characters are female campers, which have also encouraged more girls and women to take it up for real.

Anime starring female campers in the leading roles is helping to make camping popular among women. (Image on the left courtesy of ©afro, HOUBUNSHA/Yurucamp Committee)

Solo Campers: In Search of Their Own World

Meanwhile, solo camping has been rapidly increasing in popularity. The influence of popular camping vloggers, who give insights into camping alone, is one factor that has helped attract many young men, as well as dads with grown-up children, and women, to the great outdoors. Campsites have also started offering solo rates and dedicated facilities for solo campers.

Solo camping is camping that you enjoy alone.

The influence of campers filming their own camping experiences and posting them on social media has helped popularize solo camping.

One solo camper told us the appeal lies in camping your own way, and spending some alone time relaxing in nature.

Everyone has their own preferences when it comes to things like equipment and food. Some enjoy cooking with compact implements, while others like to focus on making their tents look nice with stylish decor. Some solo campers like to hop on a minibike with minimal gear, so as not to overburden the small engines, which are designed for short distances. Some coffee-loving campers talk about the joys of brewing their own coffee and drinking it in the great outdoors.

More and more equipment is available for solo camping, like this one-portion skillet.

Some solo campers enjoy the authentic taste of coffee at a campsite.

The real pleasure of solo camping is the freedom to enjoy your own style of camping. When you're on your own, you can spend your time however you like, focusing on the things you like most.

These days there are various outdoor leisure pursuits in Japan, so you can enjoy outdoor activities or camp by yourself in a natural environment. Which style appeals to you?