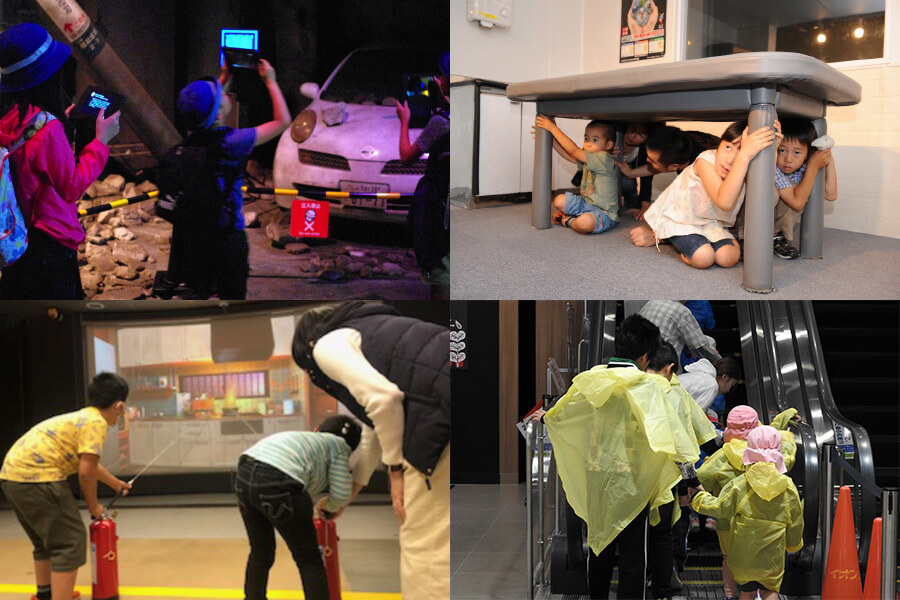 The Japanese archipelago is surrounded by the sea, and it is situated at plate boundaries in the sea and on land. As such, Japan has faced many natural disasters since ancient times, including earthquakes, tsunamis and typhoons. In recent years, climate change has brought more cases of “guerilla rainfall” where heavy rain falls suddenly in one place in the country. On the other hand, Japan is a superpower in disaster prevention, and it actively conducts disaster education to protect kids’ lives on a daily basis from natural disasters that could occur at any time. This article looks at the current state of disaster education in Japan along with related initiatives.

The Current State of Disaster Awareness and Disaster Education in Japan

In Japan, disaster education is conducted in day care centers, elementary, junior high and high schools, as well as in colleges so that people can protect themselves from disasters. The Great Kanto Earthquake struck on September 1, and this day was designated as Disaster Prevention Day. In light of this, a Disaster Prevention Week was created in the fall, and adults working at companies participate in evacuation training in addition to schoolkids as a regular event. There have been more natural disasters in recent years, such as the 2011 Tohoku earthquake and tsunami where the most powerful earthquake ever recorded in Japan produced a huge tsunami. Revisions are being made in light of this increase in natural disasters, and the importance of disaster prevention is growing even more strongly recognized in general. A type of map called a “hazard map” shows you risk areas for disasters such as overflowing rivers and landslides. You can see information about the town that you live in using a PC or smartphone. Initiatives for informing people about disaster prevention are actively carried out in different locations across Japan. In Tokyo, booklets with information on what people can do right now for disaster prevention are distributed to every household in order to raise people’s awareness for disaster prevention. “Disaster risk reduction” is a term that means minimizing the damage after a disaster occurs by knowing the dangers that are close to you. This is an important concept for disaster prevention in recent years.

Data published on the Hazard Map Portal Site simulating floods in Tokyo and the surrounding area after a tsunami, displayed on top of information about flooding, landslide disasters and road disasters. You can see that the areas with dark colors across the terrain have a high level of danger. You can select a location and enlarge the map as you like. (Source: Hazard Map Portal Site)

Disaster Prevention Slogans Passed Down Over the Years

The Tohoku region in Japan has a slogan called “Tsunami Tendenko” that has been passed down since ancient times. “Tendenko” means “each one individually,” so “Tsunami Tendenko” is used to encourage people to run to a high place on their own quickly rather than take care of their relatives, because a tsunami will come after a large earthquake strikes. Kids who learned this slogan in evacuation training had a high survival rate in the Tohoku earthquake and tsunami. In this way, the regular disaster education held at Japanese elementary schools featuring lessons from the past plays a significant role in protecting kids’ lives.

Toyota City in Aichi Prefecture is almost right in the center between Tokyo and Osaka. In this city, Motoshiro Elementary School conducts evacuation training every year to prepare for fires and earthquakes. Students study evacuation routes, and then walk through the route to the local junior high school, or they go together with day care kids to an evacuation shelter on the roof of a nearby shopping center. This elementary school is partnered with a university as well, and it measures the actual time taken to evacuate using GPS. The collected data is used for the evacuation training in the next year, such as for considerations on the best route to take or about whether to choose raincoats or umbrellas in the case of rain.

In disaster training, students gain knowledge in the classroom and then walk through the evacuation route. (Photos provided by Motoshiro Elementary School, Toyota City)

The Tsurukawa Daini Elementary School in Machida City inside Japan’s capital, Tokyo, holds a disaster prevention morning meeting every year, where students learn the actions to take to protect their lives from disasters. By understanding the key points of evacuation, the things to be careful of during heavy rain, and locations that pose danger such as nearby rivers and cliffs, students gain a stronger awareness about disasters. Staff at the school say that students have become able to stay aware and act when a typhoon approaches. The school also conducts training where guardians pick up their kids, simulating a situation where a large earthquake strikes. In this training, the elementary school takes care of the students until their parents or guardians come to collect them, because public transportation would stop after an earthquake so they would not be able to go home by themselves. This training helps develop a communication network between the school and guardians. It is common in Japan for students to go home together as a group when a typhoon is near, or in other similar situations. Schools can use bulk emailing to notify local safety patrol teams as well as guardians, allowing for teachers to lead students to the location where the students split up, while local people watch over them to make sure they make their way back from school safely. There is a famous phrase for disaster prevention that every kid in Japan knows: “don't push, don't run, don't speak and don't go back.” In addition to this phrase, this school includes “don’t go near” in its instructions, meaning that students should stay away from dangerous areas.

Students at a “disaster prevention morning meeting” in the gymnasium where teachers use slides with photos and illustrations to give information. (Photo provided by Tsurukawa Daini Elementary School, Machida City)

Japan has many disaster prevention experience-learning facilities where you can learn about disasters and experience simulated disasters as well. The “Honjo Life Safety Learning Center” belongs to the Tokyo Fire Department, and it offers a popular experience tour that families can participate in together. A parent and child participated in a firefighting experience using a fire extinguisher to spray water at the source of a fire displayed on a screen. The child said “the real-life fire extinguisher was heavy.” Meanwhile, the parent said “a disaster may come tomorrow. This served as a chance for us to talk together as a family about revising our preparations at home.” The “urban flooding experience” lets you truly feel the difficulty of opening car doors or emergency doors against the water pressure during a flood. You can have fun while you learn and gain hands-on experience in disaster prevention through other sessions apart from these two. For example, an earthquake simulation lets you feel the same tremors as an earthquake that actually struck in the past. There is also a heavy rainstorm simulation where you go into a machine that produces strong rain and wind just like in a typhoon. A smoke maze teaches you how to evacuate in case of a fire, and a hands-on abnormal weather wall features a two-way experience in the form of a quiz. A staff member at the center said: “It is important to understand that disasters are scary. This lets you think about what actions you can take next.”

(Left) The “urban flooding experience” that lets you understand how water pressure makes it hard to open doors.
(Right) The “earthquake simulation” lets you experience the tremors of a large earthquake. Here, kids are protecting themselves under a table until the quake has finished.
(Bottom) The “firefighting experience” where you can learn how to extinguish flames at an early stage when you find a fire. (Photos provided by the Honjo Life Safety Learning Center)

The Shinagawa Disaster Prevention Experience Hall holds disaster prevention experience events for parents and children. The event is designed so that you can gain experience while having fun, using familiar objects. You can play a game with “disaster prevention cards” to gain knowledge about disaster prevention while enjoying yourself. There is a bucket relay where participants use colorful balls to represent water for fighting fires. One parent who joined in with this relay gave the following comment: “My child enjoyed it too. I think it makes a difference depending on whether or not you have done something like this, so I am happy that I experienced it.” Another area has egg shells placed on the floor. This first-hand experience helps you imagine how painful it would be to step on broken glass during a disaster.

In the “bucket relay,” you work together to carry buckets, with colorful balls representing water for fighting fires.

This hands-on area lets you appreciate the danger of disasters as you step on egg shells that represent pieces of glass. (Photos provided by Shinagawa City)

At Sona Area Tokyo, you can join in a hands-on training session that gives you the skills to survive for 72 hours after an earthquake strikes. The “Tokyo Direct-hit Earthquake 72 Hour Tour” simulates an earthquake striking directly in Tokyo when you are outside in the capital. You take a quiz on a tablet device to go through a virtual experience of getting to an evacuation shelter. A particularly popular area recreates the look of damaged streets. Here, you can even find an evacuation center that looks just like the real thing, complete with beds made from cardboard and other daily necessities. A staff member at the facility said: “It is important to look at the damaged streets and the evacuation center, and to make preparations so that you will not end up living like that. I want kids to encounter the latest information regarding disaster prevention, and take the lead for their families to work together in fighting disasters.” Also, in the tsunami evacuation experience, you can appreciate the size of a tsunami that comes at you much taller than your own height.

Kids answer a quiz on tablets as they learn about disaster prevention in an area that looks just like a real street damaged by an earthquake. (Photos provided by Sona Area Tokyo)

What would you do if a natural disaster strikes? When it comes to disaster prevention, each and every one of us plays a leading role in action.
It is crucial to learn about disaster prevention and prepare on a daily basis to protect yourself and your family in an emergency.