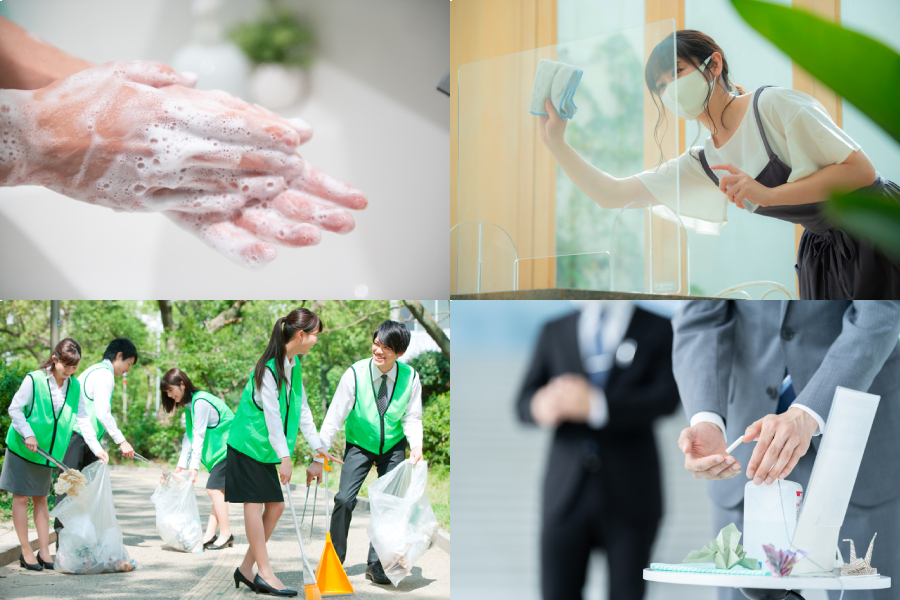 Despite the absence of trash cans, Japanese streets and downtown areas are not covered with garbage, and scenes of Japanese sports fans picking up trash after games have garnered attention around the world. All this adds up to Japan having an international reputation for being clean. Let's take a look at some hygiene-related technologies and initiatives that focus on sanitization and sterilization.

Hygiene measures such as equipment that can operate without direct contact are already establishing themselves as a part of our lives. Elevator buttons are one example of this.

A Japanese elevator manufacturer with 23 branches around the world has announced that its elevators will now be equipped with buttons that operate without contact as standard. Small infrared sensors are mounted over the existing buttons, so they respond even if you just hover your hand over them. The sensors will not be triggered if they detect something 1 cm or less from the buttons, in order to avoid false inputs when a visually impaired person needs to touch the buttons to read them.

The non-contact buttons allow users to operate the elevator by hovering their hand over an infrared sensor.
(Image courtesy of Fujitec Co., Ltd.)

At the 2021 Japan Resilience Awards, which commend companies that develop technologies and products that contribute to Japan's strength and adaptability, the Grand Prize for "Stopping Infectious Diseases" was awarded to a workplace cleaning robot from a service robots company in recognition of its cutting-edge contribution to the fight against infectious diseases. Simply teach the AI a route and it will quickly and thoroughly clean large areas without supervision. It is capable of cleaning an area the size of two tennis courts in an hour. With its superior filters, it removes 90% of floor dust, which can contain viruses and bacteria, and repeated cleaning of the same route has been proven to significantly reduce the number of bacteria. Not only has it been used to alleviate staffing shortages, but it has also been employed as a measure against infectious diseases at places such as airports, hospitals and hotels.

Washing your hands is an effective way to prevent infection, but it's difficult to wash them in areas without a water supply. That's why a brand-new water-circulating hand washing station, which can be installed in areas without running water, has been introduced to fix this problem. The used water is purified and recirculated there and then. Just 20 liters of water is enough for at least 500 hand washes. Viruses and impurities in the water are removed by three different filters, and the AI uses sensors to constantly monitor and maintain water quality. Because this system reduces wastewater, it minimizes the burden on the environment. It has been introduced in a variety of places, including fast food restaurants where diners would want to wash their hands without leaving the venue, or a stationery store that wants to provide customers with hand washing facilities in addition to hand sanitizer, and many other commercial sites and nursing facilities.

These hand washing stations can be installed anywhere around the world with a small amount of water and electricity, or even without water infrastructure. (Image courtesy of WOTA CORP.)

The Cleaners Behind the Cleanest Airport in the World

Tokyo's Haneda Airport is the gateway to Japan, and an international hub. For six years in a row, it has been ranked as the world's cleanest airport in Skytrax's international airport ratings. It's all thanks to one member of cleaning staff who changed things around. With her expertise in environmental studies and ecology, she introduced cleaning methods that raised the standards of the other staff, and greatly increased the number of staff with national building-cleaning qualifications.

Today, all the cleaners at Haneda Airport work hard to maintain its status as the world's cleanest airport, using 80 different cleaning products for different purposes and developing specialized cleaning brushes for different areas and types of dirt. On top of that, they also give consideration to their personal appearance, how they hold their equipment and gestures while cleaning, aiming to work in a way that ensures cleanliness even in places that are out of sight. The gateway of Japan is kept pristine by the skills and attention to detail of these cleaners.

Haneda Airport, the gateway to Japan's skies, is the cleanest airport in the world thanks to the care and consideration of its cleaning staff.
(Image courtesy of Japan Airport Terminal Co., Ltd.)

People in Japan have a keen awareness of hygiene. For example, Japanese schoolchildren are expected to clean their classroom once classes have finished for the day. Also, washing hands and carrying a handkerchief is something that people learn from a very young age. Japan has also developed a variety of cleaning products for public facilities and for home use. Japan is a perfect destination for travelers who want a sense of cleanliness and peace of mind.