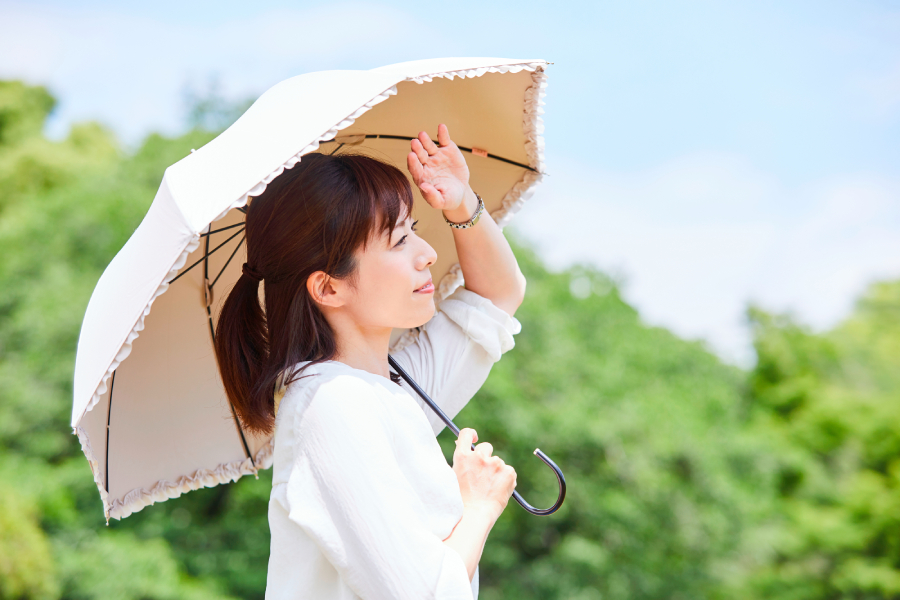 The Japanese archipelago spans a long distance from north to south, so it has a variety of different climates ranging from sub-arctic to sub-tropical, while summers are characterized by very hot and humid weather, and strong sunshine. Parasols are popular items to help avoid the intense sunlight and make summer more comfortable. The sight of so many people walking around holding parasols can sometimes be strange for foreigners. So why are parasols so popular in Japan? Let's take a look.

Parasols were popular in 19th-century Europe, as illustrated in a painting by French impressionist artist Claude Monet which features a woman holding a parasol. However, the custom of carrying a parasol gradually disappeared over time. Although some other countries still use parasols, the custom of using them as an everyday item seems unique to Japan.

In the 19th century, when Claude Monet painted "Woman with a Parasol – Madame Monet and Her Son", parasols were popular among women of the upper class, in France as well as across wider Europe.

Western-style umbrellas first came to Japan about 160 years ago. Prior to their arrival, people used Japanese umbrellas, made from bamboo and paper waterproofed with lacquer and oil, to protect from both rain and sun. In the Edo period (1603–1868), they were an everyday accessory, and were used as a prop in kabuki plays, a popular form of entertainment for the general public, with it being fashionable to carry them on one's belt.

When Western umbrellas were first imported, they were very expensive compared to Japanese umbrellas, meaning they were not accessible for the general public. Some of the paintings and photographs from the time show people wearing traditional Japanese kimono while holding Western umbrellas. For upper-class women, Western umbrellas were a luxurious and stylish item. They were made from materials such as cotton and linen, with silk tassels on the handle and tip to highlight their elegance.

Following the arrival of Western umbrellas, they started being produced in Japan in earnest, and began spreading among the general public. In the second half of the 1990s, fabric was developed that was capable of blocking a high percentage of light, which led to UV-blocking parasols being produced. These were particularly popular with women who wanted to avoid UV radiation. In addition, these parasols could be made to be water-repellent, making them able to protect from both rain and sun. Japanese people tend to use umbrellas even in mild rain, so these were popular as they provided convenient sun and rain protection in a single item.

Left: A variety of colors and designs are available to suit your taste and outfit. (Photo courtesy of Odakyu Department Store)Right: Parasols can be used at work as well as when on vacation

Parasols were used only by women for a long time, but this changed in 2007. That year, Japan experienced a very hot summer, with record-breaking high temperatures across the country increasing the risk of heat stroke. According to the Ministry of the Environment, using a parasol with a light-blocking rate of 99% or higher will reduce the amount of sweating by 17% when the outside temperature is 30 degrees. Using umbrellas to avoid intense sunlight and keep cool started to catch on among men as well.

By measuring the heat index (WBGT), you can see that using a parasol reduces the heat by 1–3°C compared to standing in the sun.
*Shown on the image. (Photo courtesy of World Party Co., Ltd.)

In 2013, the number of men using parasols increased again due to record-breaking heat, and the term higasa-danshi, meaning a "parasol boy," became widespread.

In recent years, some schools have been teaching students to use parasols when walking to school to prevent heat stroke. Parasols specifically for children have been developed, with lessons being held about how to use parasols properly. There were also recommendations that all students from elementary school to high school use a parasol when walking to and from school in the middle of summer.

Today, students from elementary school to high school use parasols every day.

Parasols are a stylish item which is also useful for helping you get through Japan's hot summers. Now everyone uses them, adding color to the summer scenery.