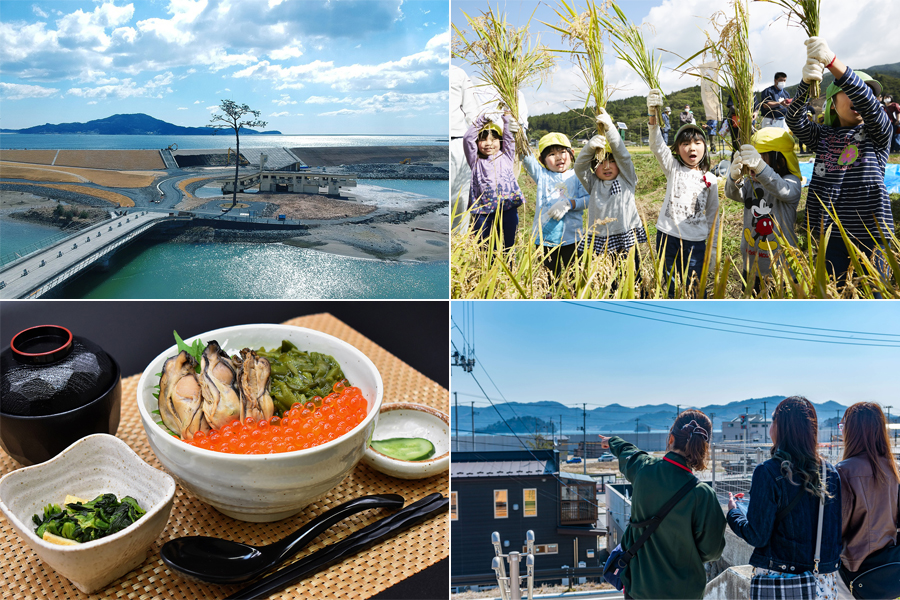 The 2011 Tohoku Earthquake and Tsunami struck on March 11, 2011. A 9.0-magnitude (Mw) earthquake occurred off the Sanriku coast in Japan, marking the largest earthquake in Japan’s recorded history. This earthquake resulted in a tsunami that brought damage to many locations, including the coastal areas in the Tohoku region beside the Pacific Ocean. The year 2021 when this article was prepared marks a decade since this unprecedented disaster occurred, taking many casualties with it.
This article is the first in a two-part special feature covering the Sanriku coast, an area that suffered significant damage from the tsunami. Part two looks at the current state of areas that were affected by the disaster.

The Road to Restoration

An eyewitness describing the disaster while standing on the roof of a new facility where the Rikuzentakata City Tourism and Industry Association is stationed.

“The whole area was covered in wreckage swept there by the tsunami, so we didn’t know what to do. I am only able to stay positive and tell people my experience because volunteers came to help from all over and because many people from all over the world offered support to us,” says Mr. Konno, an eyewitness of the disaster, at a new facility called Machi no Engawa (“Town Front Porch”) that offers a wide-open view of Takatamatsubara.
After the 2011 Tohoku Earthquake and Tsunami, many rescue squads, medical teams, and volunteers from Japan and across the globe visited the areas affected by the disaster and offered backup supplies and donations.

Rikuzen-Takata Station built to look like the original station building that was lost in the tsunami; and Takatamatsubara after renovations. (Photos provided by Rikuzentakata City)

A huge number of households suffered damage in Rikuzentakata City. Work was carried out in the city to build new things in line with the principles of universal design. The tsunami reached the roof of the third floor at the Rikuzentakata City Hall (a building with some areas reaching four stories high), causing many casualties among employees. The City Hall promoted activities to renovate areas of land using the results of a tsunami flooding simulation based on the 2011 Tohoku Earthquake and Tsunami, as well as to relocate large groups of people to higher locations for disaster prevention. Many seawalls were built, and the urban district was raised by 10 meters (about 32 feet). The number of households living in emergency temporary housing was at an all-time high of 2,139 in 2011, but this number dropped to 28 in 2020. The city aims to have zero households in temporary housing by the spring of 2021.

Walking Through the Reconstructed City with a Disaster Eyewitness

The eyewitness guides people around while holding a tablet that shows what the city looked like before and after the disaster. Participants hold freshly fried Yamada Senbei (rice crackers) as they walk. (Photo provided by the Yamada Wonderful Experience Bureau)

“After coming to this fishing town that was restored after overcoming a large disaster, I hope that people can look back and think ‘Yamada Town was fun. There were delicious things to eat.’ That’s what I’m aiming for,” said Ms. Shiiya, an eyewitness who guides people around Yamada Town. The “Restored City Walk and Taste Tour” is popular with tourists. Apart from a “disaster guided tour” that lets you experience the restored streets, as well as food tasting experiences, you can also enjoy local specialties from different times of the year, such as Yamada Senbei—a local rice cracker snack made with rice flour—and oysters in season.

The eyewitness teaches people how to fry Yamada Senbei and how to open oysters.

The reconstructed Rikuchu-Yamada Station building, and the urban district that is in the process of ongoing restoration. A new embankment was built near the coast, reaching almost twice the height of the previous one. (Photos provided by Yamada Town)

Yamada Town also suffered large-scale fires in addition to the tsunami, resulting in immense damage and some 800 casualties. After the disaster, work was carried out to build a compact town centered around the station and at an elevated height. Currently, a new seawall has been built, and a residential district has been made at a high patch of land created by carving out a mountain.

The Yamada Bay and the seawall visible (behind the fence) from the high patch of land.

From Restoration to the Future

The young president of Yagisawa Shoten, a company that seeks to revive the traditional culture of fermented foods, and the Rikuzentakata Fermentation Park CAMOCY.

“The fermentation industry has thrived in the Imaizumi area since long ago. Before the disaster, you could smell the aroma of soy sauce in the air, and you could hear people making miso. I want to restore the town so that it will be lively again like it used to be,” says Mr. Kono, the ninth president of Yagisawa Shoten, who opened a food facility in December 2020 for stores related to fermentation to gather in Rikuzentakata City. He lost his cellar and factory in the disaster, but the company’s Moromi (unrefined soy sauce) was miraculously discovered, allowing the company to replicate the flavor of their products like they have always tasted.

Onagawa Town in Miyagi Prefecture was a hot topic for being early to hold an event called “Machibiraki” (“Opening Up the City”) in the spring of 2015. This event was organized to pray for the restart of the town after stores and facilities moved from temporary buildings to the renovated Onagawa Station area. “There were difficulties in conducting work with a degree of speed to suit residents’ expectations despite the overwhelming damage, but I believe that the smiles of residents and tourists demonstrate the results of the restoration project,” says a staff member working for Onagawa Town.

A saury harvest festival held at a square in front of Onagawa Station, and a wedding ceremony that utilizes the brick-paved road. (Photos provided by Onagawa Town)

“We are now at a decade after the disaster, and work has finally finished in terms of ‘hard’ aspects. From now on, we should all work together to revitalize the town in ‘soft’ aspects as well,” says Mr. Kobayashi, who was a high-school student when the disaster struck, but who now works at the Rikuzentakata City Tourism and Industry Association.

People in the towns within the Sanriku area have engaged in positive activities, aiming to achieve restoration one step at a time. Many things were washed away and lost through the earthquake and tsunami, but the connections between people remained, producing hope and helping to develop the way forward for the future. 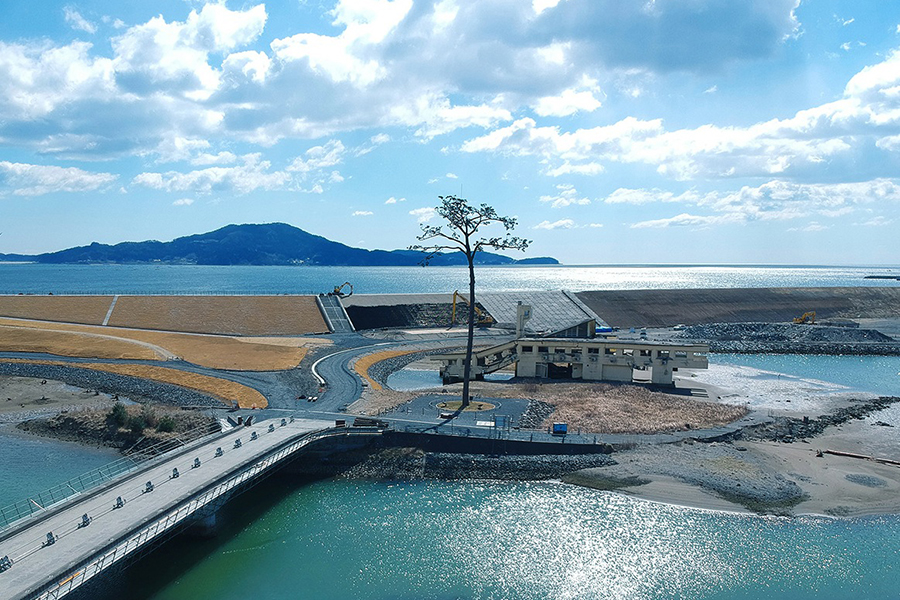 About 70 thousand pine trees at Takatamatsubara were washed away in the earthquake and tsunami. A single pine tree miraculously remained standing. This tree was called the Kiseki no Ippon Matsu, and people tell stories about it giving hope to citizens and serving as the symbol of restoration. Activities to plant trees at Takatamatsubara are currently being organized by the prefectural and city governments. (Photo provided by Michinoeki Takatamatsubara)