Tokyo Tower—an old and beloved symbol of Tokyo—has been superseded by Tokyo Skytree, which stands at a height of 634 m compared to the 333 m of Tokyo Tower. As the number of earthquakes in Japan accounts for 10% of all earthquakes in the world, one of the biggest concerns in the construction of the new tower was the earthquake-engineering measures adopted, given that the latest technologies were used in the Tokyo Skytree's construction.

The Innovative Skytree and the Traditional Pagoda

The east pagoda at Yakushiji Temple in Nara Prefecture, west-central Japan. Like Horyuji’s five-tiered pagoda, a core pillar is used in the center of this pagoda too. (Photo courtesy of Nara City Tourism Association, ©Takehiko Yano)

Japan has many temples with beautiful pagodas. Among these, the most famous is the five-storied pagoda at Horyuji Temple in Nara. This was built more than 1300 years ago and is one of the world's oldest wooden buildings. Despite countless earthquakes spanning several centuries, this structure has never collapsed. The pagoda's secret cannot be explained completely; however, the core pillar that runs from the ground to the ceiling, is known to increase the pagoda's strength. Tokyo Skytree has adopted a similar core pillar structure.

Core pillars are common to both Tokyo Skytree and the pagoda at Horyuji Temple. ©NIKKEN SEKKEI LTD

The Latest Vibration Suppression Technology was Used 1300 Years Ago?

Tokyo Skytree uses a structure identical to that of pagodas because it employs the latest vibration suppression technology. This technology is called the “added mass control mechanism.” When a building shakes during an earthquake, the overall shaking is countervailed and minimized by a device that shakes out of sync within the building. The core pillar of a pagoda is not directly connected to any other framework. Therefore, this can be thought of as vibration-suppression technology rather than a part of the main structure.

Added mass control mechanism. When the building itself swings to the left, the counterweight swings to the right. ©NIKKEN SEKKEI LTD

Wooden Buildings were Constructed because Japan Experiences Many Earthquakes 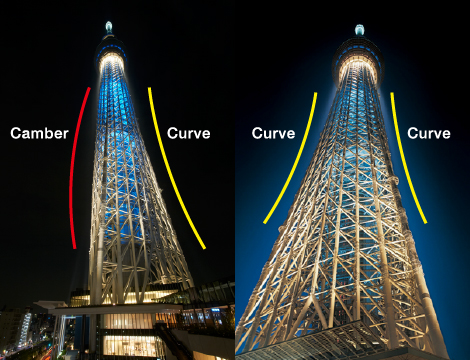 Wooden buildings have flourished in Japan since ancient times and, therefore it is not surprising that the world's oldest wooden structures are in Japan(*). Because these structures are not made of hard, rigid stone, they haven't collapsed even though earthquakes are commonplace in Japan. In addition to the core pillar, Tokyo Skytree has also adopted the ancient building technologies of "curve" and "camber." "Camber," in which the central part of a pillar in an ancient wooden building is slightly bulged, and "curve," which can be seen in Japanese swords, are both used in Tokyo Skytree. The use of architectural technologies that are more than 1,300 years old in Japan's tallest building completed only four years ago indicates the surprising level of technology possessed by our Japanese ancestors (of course, they didn't have access to computers and calculators).

* Saiin Garan of Horyuji in Nara Prefecture is recognized to be the oldest wooden structure in the world, and has been registered as a world heritage. The structure is thought to have been constructed in the late 7th century.